Katrina Says She’s Nice To Alia Because It Makes Her Life Easier. It’s So Mature And We’re Impressed 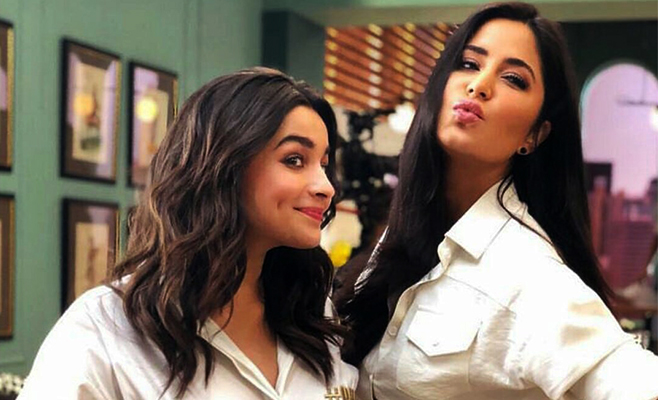 Breakups are hard. The constant need to want to speak to them, the social media stalking – wanting to know what they are up to but also not. Being forever alone at boring office parties, and of course there is no longer someone to offer you fries when you’re upset. On top of that, having to make nice with the woman your ex is now hobnobbing, it’s all a bit much and it can make the calmest of us want to lash out. But not Katrina Kaif. *takes notes for mental peace*

Katrina Kaif, in a time when it is difficult to stay friends with your existing friends, is doing one helluva job of being not just cordial but genuinely friendly with Alia Bhatt. What is this woman even? Alia is now dating Ranbir Kapoor. Katrina and Ranbir had been dating for close to 7 years. They broke up in 2016.

All this while, Alia and Katrina have been two peas in a pod, working out and hanging out together. What did surprise us was that even after the rumours of the Gully Boy actress dating our favourite Kapoor surfaced, it had no bearing on Katrina and Alia’s equation. In a recent interview Katrina shared how she wasn’t doing it for them as much as she was doing it for herself. Let’s face it, had it been us, we’d be posting emo updates on our social media about backstabbing friends and broken relationships causing people to unfollow us. This was not the route Kat chose. She chose to be the bigger and better person.

When asked about her conduct, she said, “I’m taking this as a compliment… I’m not trying to be saintly but it’s always easier to just make peace, be friends, to be loving. I’m not doing this to make your life easier. But I’m doing it to make my life easier. It genuinely is more peaceful and you feel more lighter and happier when you don’t hold on to any anger or grudges.”

And honestly, it earned the actress more respect from us and many others who struggle to make peace with the ex’s current beau. She further went on to share that, “At that point, there were other things that were sharing my focus. But now, the main thing in my life is movies. So I can focus on that. But there needs to be a balance between the two for sure.”

This probably confirms that maturity in any relationship goes a long way. Now only if there was a way to be this way.

The actress, who earlier this year admitted to wanting to jump in a dating pool, is currently single.  However we hope it isn’t for too long! For now she has her film Bharat coming up and we can’t wait to see how it does at the box office!