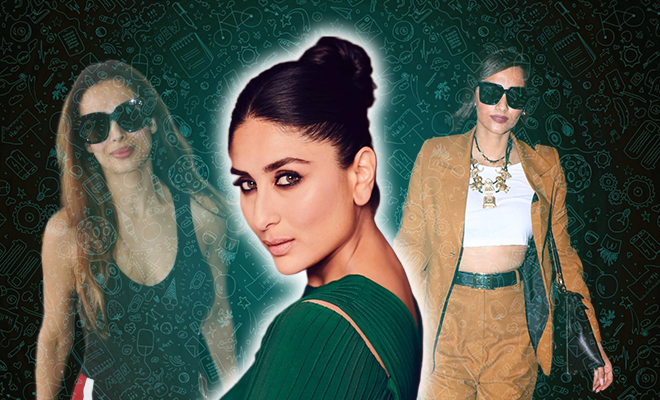 I am usually an extremely reserved person, I don’t believe in making extra friends. I have my gang that I know will be there for me until the end of the world and I’m perfectly happy with that. We laugh our asses off at inside jokes, we go dancing or just sit chill doing absolutely nothing and that right there, is my happy place. When I’m texting them, there emerges a side of me that’s snarky, gossipy and completely unfiltered. And just like Kareena Kapoor’s gang, we too have a WhatsApp group too (I’m not naming it because they will put me through hell, just know it’s super embarrassing) We all have our own girl gang groups, the sole purpose of these being to make fun of people, share memes and weird gifs. It’s so fun to know celebrities do the exact same thing as us.

Kareena was a guest on the new talk show in town called Love Laugh Live hosted by distinguished journalist Faye D’souza. Her candid demeanour in all the Instagram posts made us want to watch the entire episode on Romedy Now. She revealed some really amusing anecdotes but this is the one that stuck with us. The one post really had our attention was the one about the WhatsApp group.

Bebo and her girl gang which includes- Karisma Kapoor, Malaika Arora, Amrita Arora and yes, of course Karan Johar (Basically “the mean girl gang” of Bollywood) have a WhatsApp group started by Karan Johar. Yeah, they do that and the purpose of that group you ask? Gossip or in her words, “discussing.” When she was asked what they discussed, she said, mainly people’s airport looks. You will never be able to guess the name though, try. It’s “guts.” Sounds like it could be any of our groups, lol. Though she kept adding that it has been inactive for a while, we could kill to be a fly on that group’s wall.

When Faye asked her if they had a bet going on how many hours it took to get a certain airport look done, Kareena replied in a very satirical tone saying, “It’s discussed.” We are internally laughing so hard.

The group is notoriously known for knowing everything about everybody but who can blame them, we are all gossipmongers in our worlds. Of course, it’s always much more entertaining when they do it and then admit to it on national television.

On the work front, Kareena is currently working on Angrezi Medium, Takht and Good News.

Here’s What Alia Bhatt, Sonam Kapoor And Other Bollywood Celebs Did This Raksha Bandhan. And It’s Super Relatable!