Kangana Ranaut Says Karan Johar Deserves The Padma Shri. She Said He’s Put In Effort. Are They Burying The Hatchet? 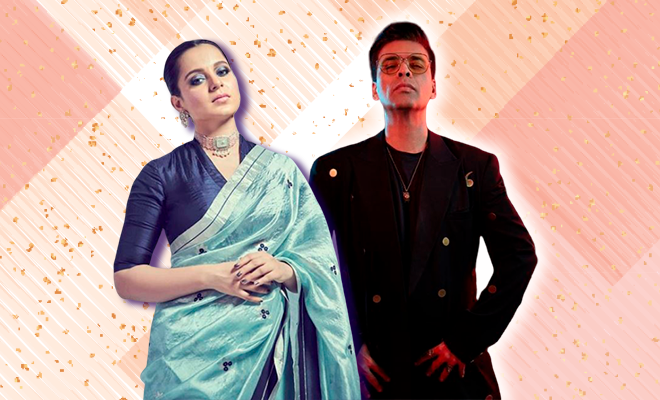 As obvious yet unspoken it is, you will always have people in your line of work, that you will end up not liking much, or in many cases – at all. In fact, they wouldn’t even have to be someone you see, meet, or even work with on the daily, but there’s always an animosity and you both nurture that mutual dislike, with respect. A dynamic that we have seen in a lot of Bollywood celebrities and stars, including Kangana Ranaut and Karan Johar, who have always shared a rather love-hate relationship with each other. No wait, I meant hate-hate. For a while now, there has been only hate and petty digs at each other, which while delicious, isn’t exactly brimming with positivity. But it looks like there may have been a break with the two of them being awarded the Padma Shri award and congratulating each other for it.

A tiff that started taking shape a few years back when Ranaut called Karan Johar our for being a flagbearer of nepotism (we’d probably agree there), has been the cause of the brewing cold blood between the two since then. From dropping barbed digs at each other in interviews, to even giving each other the cold shoulder, Kangana Ranaut and Karan Johar hadn’t been on the best of terms. And while something like this usually only gets us meaty gossip and sassy tweets trending on twitter, seems like this time was different.

As both of them were announced to be the recipients of Padma Shri this year, Kangana went on record to say good things about Karan Johar. In an interview with India Today Television, Kangana said, “I heartily congratulate him. I think he totally deserves this award. As a producer, the kind of films he backs, whether it is Kesari or Good Newwz, are commendable, as is the position he has worked to achieve. Even though his father gave him a head start, he has risen to the top because of his own efforts and merits.”

And honestly, we think it was rather mature and humbling of Kangana to let the old grudges die and move on. The industry, with the way it works, can get petty very quickly, and with the media constantly blowing things out of proportion to make for saleable gossip, getting on the bad side of someone is not difficult. But perhaps, Kangana issuing such words of appreciation and not letting the past differences come in the way of recognising talent, speaks a lot about how the industry is not all that fickle as it seems.

Also Read : Kangana Ranaut Calls Out Indira Jaisingh For Being The Kind Of A Mother Who Gives Birth To Rapists. She’s Not Wrong

Talking about her own feelings for being announced as the recipient for the India’s fourth-highest civilian honour, Kangana said, “I started my journey from a small village in Himachal Pradesh, and for me to be in the same league as these bigwigs we have grown up watching, whether it is Karan’s films or Ekta Kapoor’s serials… We knew these people, growing up. And who has not heard Adnan Sami ji’s songs? For a girl like me, to get a Padma Shri alongside them is a matter of pride.”

She further continued saying, “I have always been honoured as an artiste but this time, I have also been recognised as a citizen and for my awareness towards the country. This is special for me because you know that the industry always points fingers at me (laughs). This is also special for my family, because they feel that I am always targeted in the film industry, slapped with legal cases and involved in fights. My family is extremely happy.”

Karan Johar on the other hand, took to his social  media to express his gratitude for the same as he wrote, “It’s not very often that I’m at a loss for words, but this is one such occasion. The Padma Shri… such an honour to receive one of the highest civilian awards in the country. Overwhelmed by so many emotions right now. Humbled, elated and also thankful for the opportunity to live my dream every day, to create and to entertain. I know my father would be proud and I wish he was here to share this moment with me.”

Guess, that is all it takes to be cordial with each other in the industry and we are glad that they’ve moved past the cattiness and recognised each other for what really matters – their work.

Also Read : Deepika Padukone Will Be The Co-Producer In Karan Johar’s Upcoming Film. That’s Progressive Only If She Gets Profit-Share.