Kangana Ranaut And Rangoli Chandel Have Targeted Alia Bhatt And Ranbir Kapoor Again. How Petty Can They Be? 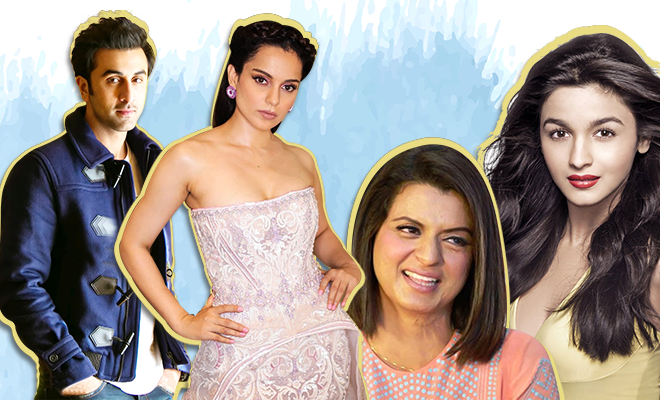 Seems like Kangana Ranaut’s sister, Rangoli Chandel refuses to stop. She’s been on a rampage on Twitter, tearing down celebrities with her unsavoury comments, comparing their success to Kangana’s. We know that Kangana has always been vocal about her opinions, and her sister is cut from the same cloth, but this time it just seems to be going out of hand. Rangoli’s latest victims are Alia Bhatt and Ranbir Kapoor (again!).

Kangana Ranaut had to go through several trainings for her historical drama film, Manikarnika: The Queen of Jhansi, and horse riding was one of them. As soon as Rangoli Chandel got to know that Alia Bhatt and Ranbir Kapoor gave up on learning horse riding for their next film, Brahmastra, it was her golden opportunity to pounce!

In a series of tweets Rangoli wrote, “These two pappus had to learn riding for their upcoming love story, they went for one day got so sore never came back again, Kangana fell from horse 3 times after various injuries and invested whole year of hard work to get galloping and action right on a horse back, this is a proof, pappus can never work as hard as hungry bhukhhad outsiders, abhi tumhari jalti hai toh main kya karoon (what can I do if you’re jealous). Please prove me wrong show me one video of pappus galloping.”

Even Kangana Ranaut commented on the incident and said, “I know who released that video. Two other actors of the nepotism gang were also learning horse-riding at the same place as me. They practised for one day and got so sore that they didn’t return. I was galloping and doing all sorts of stunts. The wooden horse was only used for close-up shots. Just because they cannot ride a horse they got jealous of me and released the video.”

Rangoli Chandel didn’t even spare Alia Bhatt’s mother, Soni Razdan saying that they are, “non Indians who are living off the land”, because Alia and Soni are British citizens. She also accused Alia’s father Mahesh Bhatt for throwing a slipper at Kangana at the screening of her film Woh Lamhe.

This is not the first time Rangoli Chandel and Kangana Ranaut have passed  mean comments about Ranbir and Alia. They have also lashed out at celebrities like Karan Johar for nepotism, Kiara Advani for her movie title Indoo Ki Jawaani, Hrithik Roshan, Aditya Pancholi and more!

Kangana and Rangoli are definitely in the mood for some revenge, but we think it’s getting extremely petty and needs to stop!