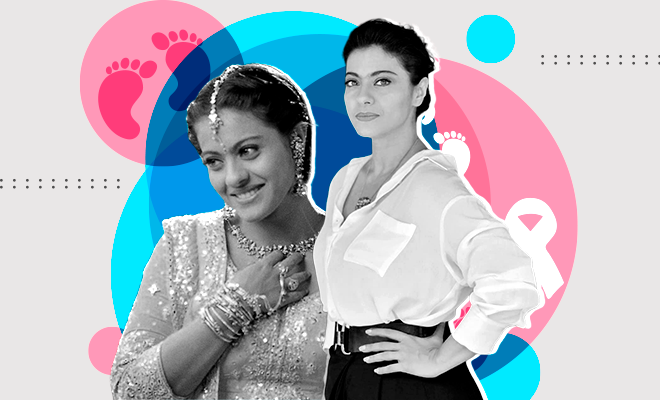 Kajol Revealed Why Despite K3G’s Success, The Release Wasn’t A Happy Time For Her And We Love How Real She Is

For the first time in my adult life, I am left feeling absolutely clueless about love. My perception about relationships has gone through several different phases over the past 12 years. When I was in high school, I believed in fairytale romances. When I grew out of that, I still believed in ‘the one’. For me, it was like you like someone, you fall in love, date and get married. Now, we as a generation are gravitating towards a more casual approach to romance, and I wanted in and so, decided to toughen up. I believed in love but the kind that grows with time; I believed that we should practically decide whether we want to take things forward with someone or not. Well, that approach did me no good either. So here I am, feeling confused because today our dating pool is brimming with commitment phobes and there are less people and more baggage here. But then again, like most of us, it’s all a façade and deep down stories of lasting love moves me. Which is why, when Kajol opened up about her love and marriage with Ajay Devgn, I had to write about it.

Before we had Deepika and Ranveer, Anushka and Virat, etc. there has been Kajol and Ajay Devgn who loved in a pre-digital era. They have been quite discreet about their connection. Which is why, we hardly know anything about their romance. But recently, Kajol poured her heart out to Humans of Bombay and made so many revelations!

The most striking one being that she suffered two miscarriages, one of which happened after K3G released. “Over time, we began planning to have kids. I was pregnant during K3G, but had a miscarriage. I was in the hospital that day–the film had done so well, but it wasn’t a happy time. I had another miscarriage after that–it was tough.” She further added that she is glad things worked out, “But eventually it worked out–we had Nysa & Yug & our family’s complete.” They have been there with each other through thick and thin and survived major emotional catastrophes together. While today, people break up because you didn’t text them back or posted a picture with a male friend. Such commitment is hard to find and it’s exactly what we seek but are also afraid to commit to. Also, what really surprises me is how these celebrities are able to mask their innermost feelings. I mean, this couldn’t have been an easy time for them and yet, they almost acted!?! as if everything was normal?

Speaking on how they met, Kajol revealed, “We met 25 years ago, on the sets of Hulchul–I was ready for the shot & asked, ‘Where’s my hero?’ Someone pointed him out–he was broodily sitting in a corner. So 10 minutes before I met him, I bitched about him! We began talking on set & became friends. I was dating someone at the time & so was he–I’ve even complained about my then boyfriend to him! Soon, we both broke up with our significant others. Neither of us proposed–it was understood that we were to be together. It went from hand-holding to a lot more before we knew it!”

In fact, if she had listened to her friends they wouldn’t have been married at all. Kajol revealed how Ajay Devgn had quite a reputation and her friends warned her about him. But all she knew was that he treated her well. Soon they decided to get married and how. “We’d been dating for 4 years, when we decided to get married. His parents were on board, but my dad didn’t talk to me for 4 days. He wanted me to focus on my career, but I was firm & he eventually came around. Again, there was no proposal–we just knew we wanted to spend our lives together,” Kajol said.

For them, it wasn’t about having a grand wedding but rather about beginning a new life together. “We got married at home & gave the media the wrong venue–we wanted it to be our day. We had a Punjabi ceremony & a Marathi one! I remember, during the pheras Ajay was desperately trying to get the pandit to hurry up & even tried to bribe him,” she revealed.

Kajol opened up about their honeymoon, “I wanted a long honeymoon–so we travelled to Sydney, Hawaii, Los Angeles… But 5 weeks into it, he fell sick & said, ‘Baby, book me on the next flight home!’ We were supposed to do Egypt, but we cut it short.”

“We’ve been through so much–we’ve formed our own company, Ajay’s on his 100th film & every day we’re building something new. Life with him is content–we’re not too romantic or anything–we care for each other. If I’m thinking idiotic things, it’ll come out of my mouth without a filter & vice versa. Like right now I’m thinking that he owes me a trip to Egypt,” Kajol expressed. Wow, they are definitely the OG power couple!

ALSO READ: Dear Magazines, Why Photoshop Kareena Kapoor And Kajol So Much That They Look Unreal? That’s Awful