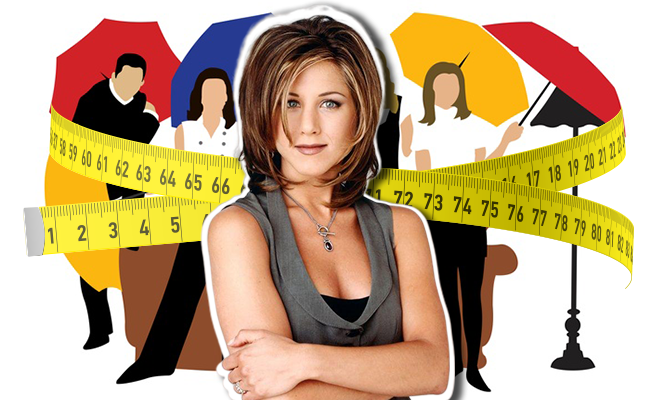 Jennifer Aniston Was Asked To Lose 14 Kgs Before Starring In Friends As Rachel. Wait, What Even?

Watching Friends has been an integral part of us growing up. And I think it’s safe to say that re-watching the episodes uncountable number of times, still forms a major part of our weekends. The show premiered 25 years ago and it’s still so relatable. We’ve watched it so many times, that we remember the dialogues by-heart and know the characters better than some of our own friends. When someone is fanatically organising things, we go ‘You’re such a Monica!’ The sarcastic one is always the Chandler and so on. It’s not just a TV show; it’s how we see friendship and love. So whenever a fun fact about the show is revealed, we’re very interested. However, I am not sure, if this one about Jennifer Aniston a.k.a Rachel qualifies as a “fun fact”.

Back then, before Aniston starred in Friends and became a global phenomenon, she was asked to lose 30 pounds, that is, almost 14 kgs if she wanted to “sustain in the showbiz”. Sure, throughout all the seasons of friends, she had a flat stomach and a super fit bod. But, really, how did weight loss shape Rachel’s character? I don’t think it had anything to do with her personality traits. In a new book, titled Generation Friends: An Inside Look at the Show That Defined a Television Era, Saul Austerlitz explained, “She had to lose thirty pounds if she wanted to stay in Hollywood. Los Angeles was a tough place to be an actress, it was a tough place to be a woman, and Jennifer Aniston’s agent was reluctantly levelling with her.”

If you observe, the ladies never gained weight throughout the seasons – at least not significantly. So I can imagine the pressure on them for 10 long years! I mean, great it helped them be fit and all that, but why have such expectations from women and not the men? Because I remember Chandler, Joey and Ross to some extent, having gained weight in the show. And anyway, even when they were skinny, it’s not like they had abs or anything. So if it is so lenient for the men, why such pressure on women?

Funny thing is, you can’t even imagine Aniston being overweight, even with the 14 kgs on her. “Aniston was hardly fat — everyone could see she was beautiful — but as the show she would one day become indelibly associated with later made a point of noting, the camera added 10 pounds,” Austerlitz added. Sure, he is probably trying to make a point here but it’s just getting lost on me. He just called her “hardly fat”. Plus, he is insinuating that beauty lies in not being fat. What the fuck is happening here?

ALSO READ: Alia Bhatt Gets Trolled After Snapping At Her Bodyguards In A Video. We Say She Had It Coming.

Aniston too, found this reality to be tainted. “My agent gave it to me straight. Nicest thing he ever did …. The disgusting thing of Hollywood — I wasn’t getting lots of jobs ’cause I was too heavy,” Aniston had said in an interview with Rolling Stone magazine in 1996. However, she decided to take it in her stride, and actually made changes to her diet – for which she is thankful! “I was like, ‘What?!’ But my diet was terrible. Milkshakes and French fries with gravy. It was a good thing to start paying attention,” she said. Okay, then. I guess some losses (in this case, weight!) make way for remarkable gains.