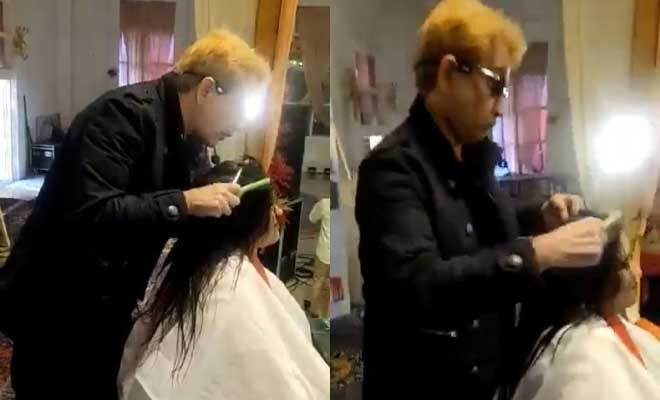 Jawed Habib Apologises After Spitting On Woman’s Head During A Haircut, Claims It Was A ‘Joke’. We Just Don’t See The Humour In It!

The third wave of COVID-19 has really taken us all by storm. TBH, I have also contracted the infection recently. These are trying times and we all need to really stay safe and follow Covid appropriate behaviour. From wearing our masks to sanitizing our surroundings to maintaining social distancing, we need to take everything very seriously. But I guess not everyone is like you and me. Amid the pandemic scare, getting our beauty treatments has been tough. Considering that sanitization is extremely important, most of us try to go to reputable salons that are known to maintain their hygiene and follow safety protocols. Jawed Habib has been one of those salons but in a shocking video that has emerged online, it’s beginning to seem like there’s more to it than what meets the eye.

The most popular hairstylist in the country, Jawed Habib left us all in a state of shock after he was caught spitting on a woman’s hair on camera. Yepp, you read that right. The ace hairstylist was in Muzaffarnagar, Uttar Pradesh for a training seminar and it was during this event that the incident took place. In the viral video, Jawed Habib can be seen giving hairstyling tips to the audience but in a shocking turn of events, he spits in the woman’s hair and jokes that spit is very effective if there is no water to wet the hair. While the audience can be heard laughing and clapping in the background, I cannot help but feel disgusted and rather appalled at the incident.

This is Javed Habeeb… Spitting instead of using water… absolutely horrible 🤮🤬 pic.twitter.com/8s7xaE8qfO

Soon after this video went viral, the woman from the video, Pooja Gupta, came forward and shared her horrific experience on social media. The woman, who runs a salon herself, shared that Jawed Habib called her on the stage to get a haircut when the incident occurred. Expressing her disgust, the woman said that she would rather get a haircut from a local street-side barber than from Jawed Habib. Well, we feel you, sister!

Following the incident, the National Commission for Women (NCW), in a tweet, revealed that the chairperson Rekha Sharma has written to the UP Director General of Police and sought an investigation into the matter and urged the authorities to take appropriate action.

The celebrity hairstylist was severely criticized by people on social media after the video of the incident went viral. Jawed Habib also turned to social media to apologise for his action. In a video shared on Instagram, the hairstyle clarified that his actions were aimed at eliciting ‘humour’ and that he had no intentions to hurt anybody’s sentiments.

TBH, I really really do not see the ‘humour’ in spitting on someone head! And getting Covid is just not funny either. Shame on you, Mr Jawed Habib.