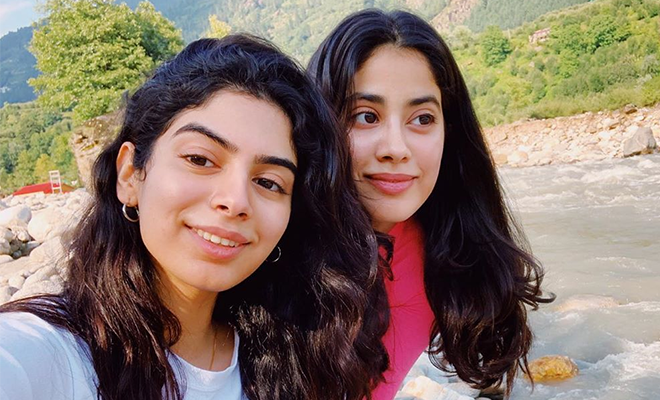 Janhvi Kapoor Is Enjoying The Perfect Working Vacation With Her Sister And Friends In Manali And We’re Jealous!

Looks like most celebrities are on vacation mode! From Alia Bhatt and Ranbir Kapoor, to Malaika Arora and Arjun Kapoor, the stars are having a chill time, far away from work. And why not? They work day and night and barely get any leisure time for themselves. Looking at their pictures may leave us envious, but we still can’t get enough of them. Recently, sister duo, Janhvi Kapoor and Khushi Kapoor have spotted having a blast in Manali with their friends.

Janhvi Kapoor is in Manali shooting for her horror-comedy film, Roohi-Afza alongside Rajkummar Rao. Amidst shooting, Khushi Kapoor and her friends had joined her for the perfect working vacation. The sisters were seen exploring the city and having a fun time. Janhvi kept it casual, wearing a pink full-sleeved tee with a pair of black pants, while Khushi wore a ‘F.R.I.E.N.D.S’ printed white top and pink wide-legged pants with a black jacket tied around the waist. The two are definitely #sistergoals! Plus, their off duty style is so casual and every 20-year-old ever.

The two sisters are really close and their social media often features both of them and content that’s really relatable. Recently, Janhvi did makeup for Khushi Kapoor and if the pictures are anything to go by, she has an alternate career as a makeup artist, we think. Either way, this other pair of Kapoor sisters are #siblingoals just like Karisma and Kareena Kapoor.

After wrapping up their shooting schedule in Manali, the movie’s team will head to Agra, where they will shoot till the end of July. Speaking of the same, a source stated to DNA After Hrs, “After wrapping up this long spell of Roohi-Afza, Janhvi will be taking off to Georgia for the biopic on Flight Officer Gunjan Saxena, who made history as she flew into a combat zone during the 1999 Kargil War. They will film important sequences during the 15-day schedule.”

Janhvi Kapoor will also be seen in Dostana 2 alongside Kartik Aaryan. The film is being produced by Karan Johar.