After The Queen’s death, people from around the world have gotten together to pay their respects and celebrate her life, at her funeral. Indian president Droupadi Murmu also flew to London to attend the funeral of Queen Elizabeth II at Westminster Abbey, yesterday. She bid adieu to the well-known monarch at the event that celebrated her life and her rule over the country. The president also signed the condolence book in the memory of Her Majesty at the Lancaster House in London, expressing her respect and tribute for the departed soul of the queen. She also shared pictures from the event.

President Droupadi Murmu signed the Condolence Book in the memory of Her Majesty the Queen Elizabeth II at Lancaster House, London. pic.twitter.com/19udV2yt0z

President Droupadi Murmu met with Prime Minister of Bangladesh Sheikh Hasina and her sister, Sheikh Rehana just before commencement of the State Funeral at London. pic.twitter.com/PZWiAcqtsF

Which Other Famous People Attended To Bid Adieu To The Queen?

Her Majesty Queen Elizabeth II has left the world with a lot of pleasant memories. A lot of celebrities from around the world showed up to bid adieu to the Queen as they watched the monarch get laid to rest yesterday. In fact, various stars from around the globe shared their memories of the moments when they met the queen online during her funeral. 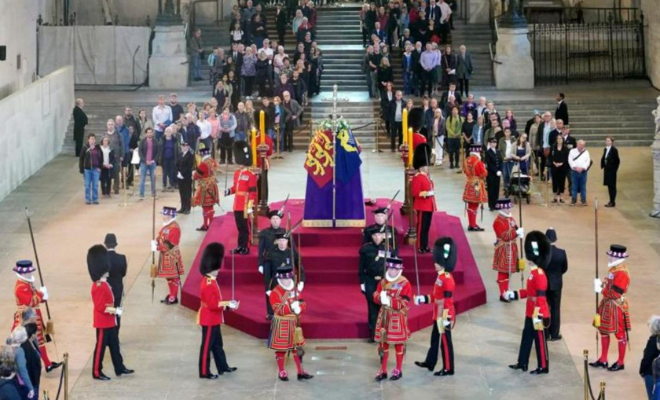 King Charles III and family sombrely followed the Queen’s coffin down from Westminster Hall to the Westminster Abbey chapel. With him were his wife Camilla, Queen Consort, sons Prince William and Prince Harry, and their wives Catherine, Princess Of Wales, and Meghan Markle. Also present there were the Queen’s other children Princess Anne, Prince Andrew and Prince Edward and their families.

The Cavalry Last Post is sounded by the State Trumpeters of the Household Cavalry before the Nation fell silent in Remembrance of Her Majesty The Queen. pic.twitter.com/ap5ccCiQW2

Of course, the Current UK Prime Minister Liz Truss was in attendance as well as other surviving UK Prime Ministers like Boris Johnson, Theresa May and David Cameron. US President Joe Biden and his wife Jill Biden were also present and seated in the 14th row.

Her Majesty Queen Elizabeth II led always with grace, an unwavering commitment to duty, and the incomparable power of her example. pic.twitter.com/YIuShf1TPJ

The 2000 seats of the abbey were filled with international representatives and political leaders from around the world. Celebrities like Sandra Oh and Bear Grylls also attended Queen Elizabeth’s funeral on September 19, 2022. The two came with different delegations with respect to their own countries.

It’s a day we will never forget… a truly beautiful testament to our Nation’s Sovereign, Her Majesty Queen Elizabeth. Rest in Peace. Your duty done. Long Live King Charles… pic.twitter.com/Yik12Sfzjo

Another actor who attended the funeral was Sophie Winkleman from Little Peep and Two And A Half Men. She attended as a part of the royal family along with her husband, Lord Frederick Windsor.

Celebrities from around the globe also watched the Queen’s funeral online and shared their memories of the monarch through social media. Tom Felton, Josh Gad and various other stars ended up getting very emotional while bidding adieu to Her Majesty.