In Kerala, A Muslim Couple Got Their Hindu Daughter Married In A Temple. This Is So Heart-Warming 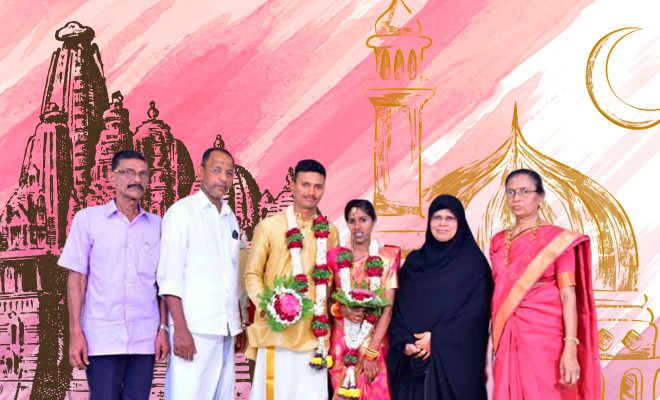 In a country where everyone wants to shout about their religion and force everyone to listen to what they have to say, anything that brings people together is always good news. We are largely divided, so when we read something that warms the cockles of our heart, we definitely want to talk about it.

We are talking about this wedding that took place in Kerala. Yes, we know, there’s nothing extraordinary about a wedding. But in this one, a Hindu daughter got married in a temple with the blessings of her Muslim parents who adopted her. This is the kind of story that puts a smile on anyone’s face.

Rajeshwari is 22 and on Sunday, she tied the knot with Vishnuprasad in a Hindu temple. And it’s not just the wedding itself that’s is a story if triumph of love above everything else, even the process of choosing a husband was beautiful.

Rajeshwari’s parents went groom hunting and had very specific requirements from their son-in-law. One of them was that he be a teetotaller. The News Minute reported that Abdulla, Rajeshwari’s father said, “We had told a few people to get her a good boy. A few boys came but we did not like them after a detailed inquiry. We were very particular about the character of the boy who would marry our daughter. Our main demand was that he should be a teetotaler.”

Both parties were willing to go ahead with the ceremonies. The only hiccup was finding a temple that would allow Rajeshwari’s Muslim family to enter.  Finally, they found the temple at Manyott.

After the wedding rituals, Rajeshwari, bedecked in a pink saree, touched her mother Khadeeja’s feet to seek her blessings. Her mother lovingly touched her head, wishing her luck and love. Everything about this wedding is beautiful and it’s what we needed to read on this day where a lot of things have been grim.

This put a spring right back in my step.