In Case You Missed This, Greta Thunberg Met Malala Yousafzai At Oxford University. There Is Hope! 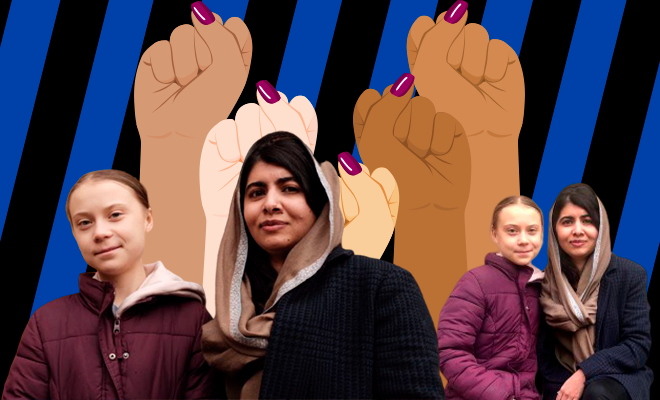 No matter how ignorant we want to be, there are a few things that we can’t deny no matter how hard we try. The fact the world is doomed is one of those things. Don’t get me wrong, I am not being cynical. Okay, maybe a little, but hear me out at least. Polar ice caps are melting, wildlife is seriously endangered, thousands of acres of the Amazon forest have burnt down and now, the Coronavirus presents a very real threat.

Things aren’t any better in the socio-economic and political sphere of the world either. Women are still being subjected to physical and sexual assault and rampant sexism in most countries. So, I think it is safe to say that very sad things are happening around the world at this very moment.

However amidst all that, something very cool happened on Tuesday. The world’s two most renowned activists, probably the only people who can make things better for us, met at Oxford University. If you haven’t guessed already, I am talking about Greta Thunberg and Malala Yousafzai.

Also Read: Greta Thunberg Gives It Back To Donald Trump For His Tweet In The Most Epic Way Possible And We’re Living For It

She’s the only friend I’d skip school for. pic.twitter.com/uP0vwF2U3K

Greta, the 16-year-old climate change activist is in the United Kingdom to join a school strike in Bristol on Friday. She visited Malala at Oxford University, where Malala is a student of philosophy, politics and economics. The 22-year-old Nobel prize winner posted a picture of the two of them sitting on a bench and captioned it, “Thank you, @gretathunberg *heart emoji*.”

Malala also posted the picture on Twitter and wrote, “She’s the only friend I’d skip school for.” It gives me so much hope just knowing they are friends.

The power pair met to discuss their respective movements at Lady Margaret Hall on the Oxford University campus. Greta also addressed a few students about protest and climate change. The college’s master, Alan Rusbridger posted a picture of Greta saying, “Honoured to host @gretathunberg at @lmhoxford today. grateful she found time to talk to some of our students about science, voting, the limits of protest, divestment, real zero v net zero, and much more.”

Also Read: Licypriya Kangujam Is An Environmental Activist From India And She Doesn’t Want To Be Called ‘Greta Of India’. This Is Her Story

Can you imagine what it would be like if these two incredible women joined forces? Both of them are extremely powerful in their own right, but together they would be invincible. Greta heads the largest anti-climate change movements by organizing school strikes most Fridays and giving impactful speeches. And after being shot by a Taliban fighter in 2012, Malala became the global symbol for women standing against oppression. She was the youngest recipient of the Nobel prize in 2014 for all the work she has done for women around the world.

After they met, Greta also posted their picture on Instagram with the caption, “So… today I met my role model. What else can I say?” This earned a comment from UNICEF saying that they were both role models for us and I can’t agree more.

These two young women have become global symbols for change and we want to see more of them working together.