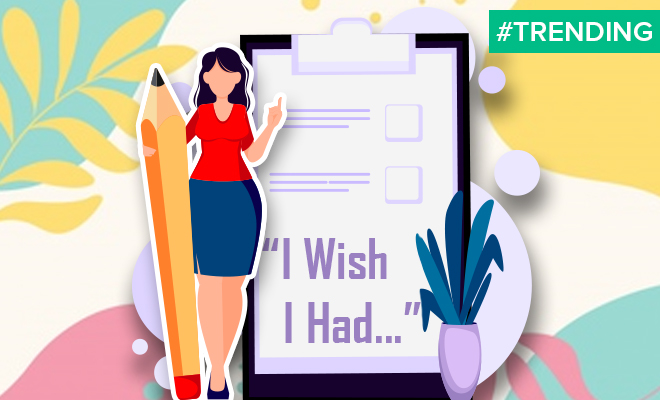 In A Reddit Thread, Netizens Discuss About The Things They Wish They Had Done Sooner In Life. Their Answers Will Make You Go After What You Love!

For as long as I can remember, my mother has always talked about learning Spanish as a foreign language before she makes that trip to Spain with my dad and knows enough of the tongue to surprise a few natives. From collecting study material to bookmarking YouTube tutorials to even enrolling herself into an online course but somehow she never had enough time for it. Now, my mother has been playing peek-a-boo with Español for too damn long.

Alas, she is 53 now and the only bit of Spanish she knows is through an Enrique Iglesias song.

Till date, she still hasn’t given up on her dream. But the thing is, she hasn’t gone after it either. And that regret gets more and more visible in her eyes every passing day. A feeling I don’t want passing down on me, especially after I have witnessed this year, how unpredictable life can be. Despite having been told numerous times, either by friends or family or even characters in movies, that life is too short to not go after what we really want, we seldom ever make an effort to do something. Rather, we procrastinate it for the “one day”, that in words of both – Tom Cruise and Hrithik Roshan, is code for never.

Mark Twain once said, “Twenty years from now you will be more disappointed by the things you didn’t do than by the things you did.” And considering the regret, I carry for not taking the pole dancing class last summer when I had the chance or for not making that spontaneous trip with my friends is still too heavy to carry. I can see what he meant was in fact, bitterly true. But since there is no time better than the present, especially during the lockdown while we have plenty of it, it’s made a whole bunch of us wonder if only we started doing things we love sooner in life.

Also Read : This Twitter Thread Discusses What It’s Like To Be Sick In A Desi Household. It Is Extremely Relatable And Hilarious

Starting with an interesting conversational thread on Reddit, netizens shared with everyone the one thing they wished they got to sooner in life than later, and their answers were all but too relatable to read. One user wrote, “Standing up for myself. It would have made my home life a lot more tolerable”, while another one wished, “Yoga – made me a much fitter, more confident and happy person!”.

From talking about dental care to reading books, exercising to smiling more often, people earnestly talked about all the things they now enjoy doing and hope would have seen the light of day much sooner in life. It made us, not only, rue the lost chances, but also motivated to go after what we have on our bucket lists. Going out there and doing the thing that we have held in our hearts for so long. Even if it’s as simple as waking up early or as challenging as quitting smoking.

Guess it really is never too late, and from the looks of it, once you go after what you love in life, it only uphill from that point on. And the cherry on top of that cake is that you will have no regrets!

Also Read : #Voices: Don’t Feel Guilty For Choosing Your Mental Health. This Twitter Thread Is Encouraging People To Step Back When Needed Without Remorse

GET HAUTERFLY IN YOUR INBOX!
Related ItemsFeaturedTrendingreddit thread discusses things people wish they had done soonermark twaingo after what you love in lifewhy you wish you had done what you love soonerbucket lists