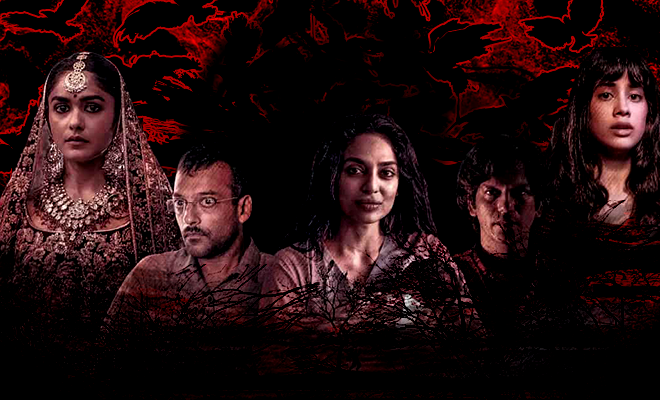 I Watched Ghost Stories So You Don’t Have To. Because It Is Bland And Not Even The Fattus Will Get Scared

As a horror fanatic, I am open to watching all horror shows or movies. The standards are pretty low for these movies – they’ve to scare me or in the very least, at least spook me. Now I know, horror is a very tricky genre. Some can’t get through a movie without screaming and closing their eyes aka fattus, while the others will actually enjoy a jump scare or two. I am the latter. But in the past few months, there has hardly been anything that has even piqued my interest.  I am honestly so bored. I want something new. Something exciting. Something that will not let me sleep at night.

This new year, I woke up in the afternoon with a major hangover. As usual, I sat down to grab a bite and decided brunch with entertainment was the way to go. So, I browse through Netflix and see that Ghost Stories has released. The previous installation of this anthology series was Lust Stories where all four directors – Anurag Kashyap, Zoya Akhtar, Dibarkar Banerjee and Karan Johar – talked about sex. As the name suggests or gives away entirely, in Ghost Stories, the directors try to spook us but mainly fail miserably.

The first story, directed by Zoya Akhtar, stars Janhvi Kapoor and the remarkable veteran actress Surekha Sikri.  Janhvi Kapoor plays the role of Sameera who is a nurse and Surekha Sikri is Mrs. Malik who suffers from dementia and is bedridden. The story starts off innocently enough, there’s interest and intrigue. And it gets better as Sameera unfolds the truth of Mrs. Malik. Personally, this to me was the best one. After that, it was pretty much downhill.

Anurag Kashyap’s depicts a mother’s fear and a child’s atrociousness in the most disturbing manner. Neha (Shobhita Dhulipala) is shown taking care of Ansh (her late sister’s son) whose father is busy with work, so he drops him over to his favourite aunt’s place. Ansh loves Neha more than anything and can’t stand that she is having a baby of her own. He fears that she will love him less if she has her own baby. The premise sounds interesting but the story dies and comes to an almost predictable end which can’t be good for any ghost story.

Directed by Dibakar Banerjee, this had me confused. A visitor (Sukant Goel) is on his way to the village and has to walk it up all the way because his rickshaw driver refuses to drop him at his destination. It’s evening and the sky is gloom while it rains and this visitor switches on his flashlight. He stumbles upon a little boy who is wearing a biker’s helmet. He asks him to switch off his flashlight if he wants to survive and follow him. What follows is abrupt, weird and kind of scary but only just so. I mean, if you were watching this at night, with all the lights switched off, this might spook you but while interesting, it wasn’t scary.

Karan Johar should really stick to making SOTYs. Ira (Mrunal Thakur) is in conversation with Dhruv (Avinash Tiwary) about getting married. They like each other and everything is looking good until his mom says that he should take permission from ‘granny’. Ira asks Dhruv why he never mentioned her, to which he says that she has been dead for 20 years. It’s already ridiculous at this point, but it’s when they’re having sex that’s awkward and weird and frankly, a little incestuous. I am giving this a hard pass.