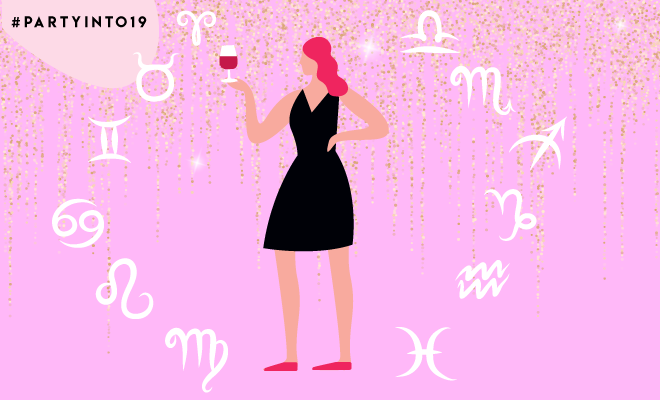 ‘Tis the season to let loose! When Aries hits the party, it better be a loud wild affair! You’re most likely to attend if there’s an open bar and the shots are flowing. Dancing on tabletops is inevitable with an Aries in the house. You’re getting all the attention with your slinky AF outfit and you revel in the chase. Your motto this season is, a little party never killed nobody.

Most likely to: Shame others for not joining the party!

Who dare throw a party without perfectly catered food? Not if you’re attending Taurus. Everything from socialising to selfies is secondary to snacks.  Even if the host badgers you into getting a drink first, you’re headed straight for the snack table. You party on impulse, RSVPing last minute is to be expected of course, and the only way to get you to an after-party is to bribe you with fries.

Most likely to: Splurge on an outfit because you better look like a snack before you eat a snack!

If ever a Gemini is at a party, you can be rest assured everyone will party like it’s Mykonos! The Lindsay Lohan of the zodiac, you’re most likely to be wasted before 10pm while insisting you don’t have an alcohol problem (drink lightly spilling in hand). Gemini is the prankster of the party, tapping shoulders from behind and running away. Everyone’s your best friend from the bartender to the bouncer and you’ll only remember your night via Instagram the next day.

Most likely to: Forget where you left your car keys and badger the host the morning after!

Here comes the moody one, Cancer goes from hating the party and complaining about missing their bed to drunk dancing in five minutes. You love the sound of your own voice over the music and live for playing agony aunt, telling your friends how beautiful they are! But nobody can deny that you’re a homebody and Cinderella Cancer always leaves by midnight to get cosy in bed.

Most likely to: Order a samosa and mimosa in the same breath and judge people for judging you.

When it comes to being the centre of attention, few do it as effortlessly and unintentionally as you Leo! You could walk into a party in a pyjama suit and still grab eyeballs like the majestic beast that you are. Your natural charm makes you the easiest to like and befriend, it also just as easily makes people hate you because you’re flawless in their eyes.

Most likely to: Have a drink or five bought for you, then leave them wanting more!

Just as Humpty Dumpty, it takes all the king’s horses and all the king’s men to get you out of the house! The irony is, as soon you’re out you’re the first one to have a good time and hit the dance floor. However you’re never one to advocate a bar, making you the worst person to ask where to go on a night out. You’re inevitably most comfortable in a setting where you can be in PJ’s and stuffing pizza and you don’t have to make much of an effort.

Most likely to: Cheer when a plan falls through and suggest a Netflix and pizza party.

When it comes to replicating Instagram influencer styles, nobody goes harder than you Libra! You’re most likely to be spotted in a slip dress and a droopy fur coat and when you walk in everyone runs up to say hello – because you’re no less of a socialite yourself. As much as you try to play it low-key you love to surprise people and order a round of tequila. Anything to make the night interesting! On the flipside, you’ll also willfully bargain the price of a glass of champagne (it’ll never cost the same as Old Monk!)

Most likely to: Go for a party hoping to fall in love.

When a Scorpio enters the party you know it’s the real deal because you’re only attending if there are rituals and substances involved. You’re most often sighted in the shortest dress or the tightest pants and laughing in the face of judgment. And if it’s on your back, it’s gotta be black – you love to keep up an aura of mystique.

Most likely to say ‘Don’t hate me coz you ain’t me’ before announcing a bigger better after party at your house.

Legend has it, if there’s a party, the Sagittarius has to attend. You’re most likely to drag your friends all across town to make sure you’re at each of the fifteen parties this season. Every night is a pub crawl in your world and every day is Friday! You redefine letting loose and both inspire and scare your friends with your work hard party harder attitude.

Most likely to: End up behind the bar serving drinks while discussing the theory of relativity!

Make way for the harpy! Capricorns at parties are most often found in a corner being bitter and judgy while your friends are doubling over with laughter. You’re the entertainer, the fun but snarky one, you’ll complain about being too old to party but also knock back a jagerbomb like a pro. When you walk into a party, you always have the proverbial power suit on. Every occasion is an opportunity to network and build contacts.

Most likely to: Strike a collaboration deal and toast with beer!

If there’s a sign that beats to the sound of their own drums, it’s you Aquarius! While the regular party affairs have their own charm you can’t help the undeniable attraction of a rooftop party with some homegrown musicians playing beside a bonfire. You love to compliment people with such honesty they often don’t take you seriously but it’s your inner flower child they come to love and appreciate.

Most likely to: Wear white and spill red wine on yourself.

With Pisces, it’s either a quick evening out or a proper sleepover party where you do the walk of shame at 7am! You love to play host and are most likely to call everyone home for a party this season while also losing your mind about perfecting every tiny detail but also loving being in control of every appetiser but also complaining about how stressful it is to host. Your idea of fun is to see other people have fun at your party.

Most likely to: Get stressed about a party and then have the best time at it!