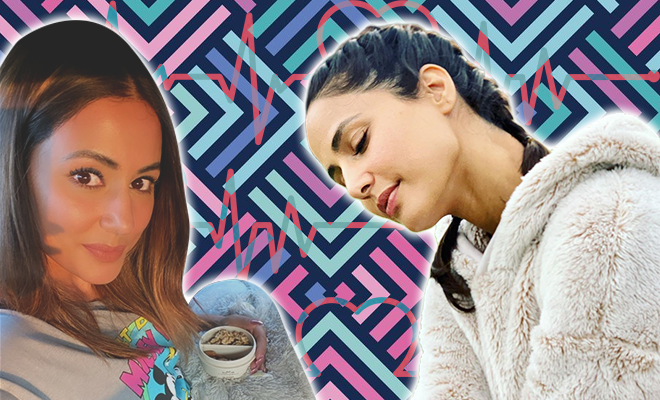 There are a few moments in life that we all dread- the moment your exam results are out, a job interview, the awkwardness of a first date. But there this one moment everyone dreads, universally. Want to take a guess? Yep, going to the doctor! We aren’t the only ones that feel that way, Hina Khan dreads these too. I remember this one time I had a visit with my family doctor to get an antibiotic injection (a little context- I was sick) I was so terrified, my father had to trick me into going. They are just inherently scary people. That is the reason when Hina was dreading her doctor’s appointment, we could completely relate to her.

Earlier today, Hina put up a story on Instagram while on the way to her doctor’s appointment. While she looked sun-kissed and stunning in a Mickey Mouse sweatshirt, her caption on the story gave away her nervousness of visiting the doctor. Her story read, “Doctors appointment. Fingers crossed. Hope I make it on time.” You have to admit it is a little funny since her caption describes us all while we are on our way to the clinic.

Also Read: Hina Khan Just Wore A Dress And A Blazer All Rolled Into One And She Looked Stunning

Hina Khan is easily one of the most talked about TV actresses. Her claim to fame is her being declared the runner up of Bigg Boss 11. She began her career by playing a prominent role on the popular TV show, Yeh Rishta Kya Kehlata Hai. But she became a household name after she played the iconic vamp Komolika in Kausauti Zindagi Ki.

Hina will mark her Bollywood debut with the movie Lines, opposite veteran actress Farida Jalal. The poster for this movie had been unveiled at the 72nd Cannes Film Festival where Hina made her red-carpet debut. She has also bagged the female lead role in Vikram Bhatt’s Hacked.  She is currently prepping for her upcoming Indo-Hollywood movie, The Country of Blind. She will be seen bring to life, the character of Ghosha a tough, visually-impaired village girl.

She really is one busy bee!