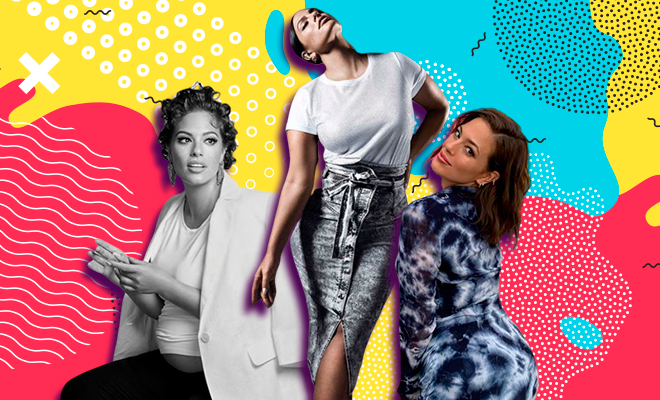 If you scan the list of people you follow on social media, you will find that most people are out there to make you feel quite shitty about your life. While some people are faking it, some are constantly cribbing which kinda makes you want to loan them some sunshine. However, there are some people whose posts fill you with positivity. You begin to see the brighter side of things and feel more in love with yourself than ever before. These posts are not preachy but show you a whole new perspective that can transform your life. Ashley Graham is one such influencer who is using her body positivity to change lives.

Whenever someone mentions plus-size model in America, hers is the first name to pop in your head because she has become that popular. Of course, there are several big women embracing their sizes and modelling for brands, magazines and commercials. But Graham has built herself like a brand and that’s the name you remember, right off the top. Yet, while the world calls her a “plus-size” model, she detests that term because she says it creates segregations and restricts people to a certain category.

Ashley Graham is not just about embracing her size; she is a complete package of body positivity, not worrying about hypocritical societal norms. In fact, she had revealed that her interracial relationship with her husband was a shock for her conservative family and that kind of racism had left her feeling embarrassed. The couple had their first baby and recently, Ashley shared a post of her breastfeeding her baby. It garnered a lot of love and applause from the netizens and rightly so.

In the picture which she captioned, “Multitasking Sunday,” you can see her breastfeeding her baby and immersed (possibly working) on her phone at the same time. The casual approach is what makes this picture even more inspiring. The post subtly puts the message out that breastfeeding openly is not a biggie and it should be normalised.

Several women dropped their appreciation in the comments. A user wrote, “You’re so empowering and i can’t even begin to explain how much you inspire me.” Another one said, “Me everyday (sic). Keep posting breastfeeding pics! Helps a lot of mothers out there who struggle with anxiety when feeding in public! I definitely did at the start!”

Embracing her post-pregnancy body with the same love she gave it before the pregnancy, she shared a picture of her stretch marks with the caption, “Same me. few new stories.” She received love from several of her industry friends including models, fashion editors, businesswomen and other moms. Fashion Editor Jennifer Dickinson wrote, “16 year old me sobbed over my first set of these. I haven’t learned to love them but I have got to a place where I don’t give a sh*t about them.” Bozoma Saint John, the CMO of a talent agency called her stretch marks “Warrior markings.” A mom commented, “So many years I was ashamed of my stretch marks and ‘baby pouch belly’. Now I love my body. I created life. I have war wounds. And that is what makes me who I am today. Kudos to you too.”

One may assume that because she has been the torch-bearer of body positivity, pregnancy would have been easier on her. We may think that she didn’t have to go through the struggles of accepting the changes in your body that happen when you’re expecting. But that’s not true. Change is always difficult and with the weight gain, she did have to struggle initially to find her peace. In her digital series, Fearless with Ashley Graham, the model broke down and confessed, “I had just announced that I was pregnant and I thought then I was going to feel good and I didn’t. I just felt terrible. And that morning, actually …I was like, ‘Get it together, Ashley, there’s other women out there that are going through the same thing as you — why don’t you have a dialogue?’”

She later posted a picture talking about her weight gain and wrote, “the best part is, I don’t care!” Graham went on to post several pictures of her pregnant body, some of them deliciously nude. She embraced every scar, every extra inch that she had on her and refused to let it make her feel insecure. Graham has worked to achieve that kind of positive body image and she can’t let anything take that away from her. She went on to don the cover of Vogue, as pregnant as pregnant can be.

ALSO READ: Maanvi Gagroo Talking About Being A Plus-Sized Actress Is The Kind Of Body Positivity We Need!

You don’t have to be a plus-size woman to be inspired by her. Because if you look at the bigger picture, she isn’t just about being big. She is about loving yourself for who you are. She is about doing what you want to do, without worrying about the naysayers of the society pulling you down. She is confidence personified and if this doesn’t make you want to love yourself day in and day out, I don’t know what will.