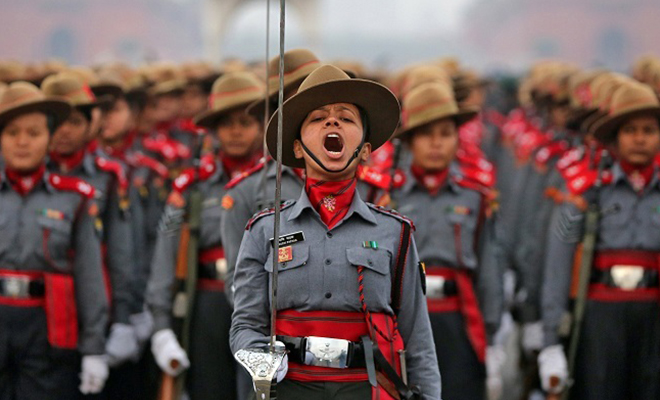 This year on Republic day, we shall see for the first time in the history of Assam Rifles, an all-women contingent saluting the President at Rajpath on 26th January. This moment shall be etched in history not just because of this, but also because some of the mahila jawans in this contingent are the family members of soldiers who sacrificed their lives fighting for the country.

The women have been recruited on compassionate grounds making this Assam Rifles Contingent even more special.

Gayatri Sharma, a woman rifle who joined the force about a year and a half ago was recruited in place of her father whom she lost when she was just 3 years old in 2001 said, “I got a letter from Assam Rifles to join the force. I will perform my duty with full dedication for my country just like my father.”

Another rifle woman, Sunita Thapa who stepped into the shoes of her late husband who died in an accident shared, “The entire family is proud of me and I am proud of the Assam Rifles.” She adds that she wants to fulfil her husband’s dream as a soldier.

While this is definitely historic, these women aren’t the only ones storming male bastions. Women like Avani Chaturvedi, the first Indian woman ever to fly a fighter aircraft solo, or Bhavana Kasturi who is the first lady officer to lead a contingent for this year’s Army Day Parade on 15th January and Major Khusboo Panwar who will lead the Assam Rifles on Republic day are the women who are shaping the history of India.