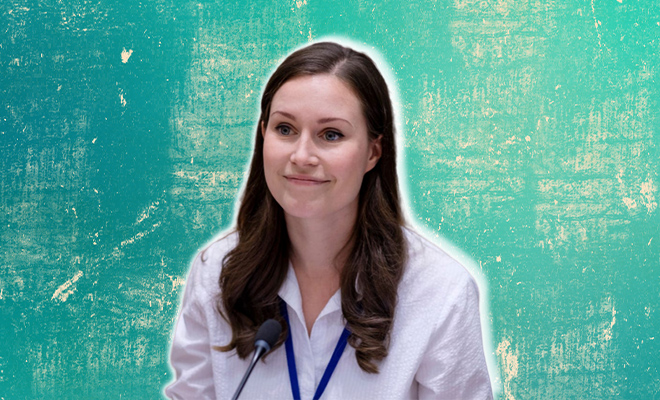 Finland Has A 34-Year-Old, Female PM In Sanna Marin. It’s Making Us Want To Move There!

Guys, let’s take a moment here. Finland has just appointed a 34-year-old Sanna Marin as their Prime Minister. Do you know how many women are in PM Modi’s 24-person cabinet? About 6. Think about it, we are generations away from having a young woman helm our country. Even though today it is very important to have a leader that actually understands the direction the world is moving in. To have a woman at the helm of affairs and at such a young age, it’s a distant dream.

While Finland swears in 34-year-old Sanna Marin, we have ministers going on record to condone heinous crimes like rape. Do you see the difference in the governments of the two countries? That is how much we need to progress if we ever want to live in a country that is inclusive of women as well as men.

Also Read: Indian Navy Gets Its First Woman Pilot Ever And Here Is Everything You Need To Know About Sub Lt. Shivangi Singh

However, no matter how much we fight and spread awareness I don’t think something like this is ever possible in a country like India. I am not being cynical, it is highly improbable because at least 70% of our population still believe in the rigid and orthodox social norms that dictate women are only meant to bear children and do household chores.

If we want actual, noticeable progress that mindset is what we need to change. And Sanna Marin is proof that a woman can achieve anything when she puts her mind to. We are so incredibly happy and can’t wait to see all the amazing work she does for her country.

Also Read: Miss World Takes Back Winning Title From Woman After Realising She Is A Mother. What Is This Discrimination?

Just because we are far behind, doesn’t have to mean we can’t progress and make reforms. Change is possible, we just have to take actual action. We need leaders who are progressive and liberal themselves, people who will focus more on making our country better and less on how many cows died.

Having said that, congratulations Finland!

Sudha Murthy Was The Only Female Student In A Batch of 599 Men In Engineering In Her Time. We Love Everything This Woman Stands For!