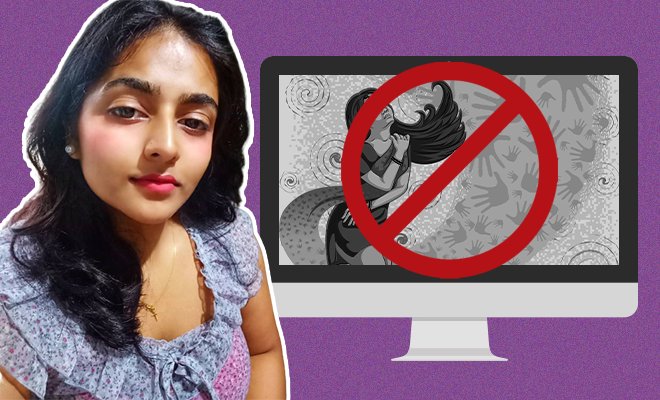 One of the biggest boons of social media is the anonymity that it provides. One of the biggest banes of social media is the anonymity that it provides. Yes, it’s seemingly the best thing when you want to stalk your ex’s new girlfriend but the rest of the times it opens you up to a world of brutal cyber-bullying. We all are aware of how common that is. I have this innate fear that a private video or phots of mine are somehow going to end up on the dark side of the internet. It happens so often and getting them down is a herculean task. Just ask ex-Actress Sona M Abram. A clip from an old movie of hers, of a sexual violation was posted online 6 years ago, without her consent, and she is fighting to get it pulled down.

Let me start from the beginning. Seven years ago, Sona starred in a Malayalam movie called For Sale. She was merely 14-years-old at the time. The film was about a woman ending her life after watching her little sister being blackmailed. Sona was cast as the younger sister. And in an interview with The News Minute, she recalls having to act in a particularly uncomfortable scene.

Sona told The News Minute (TNM) that the movie was shot without a proper script. It was all very spaced out. Random scenes would be shot and random times. During the shooting, her family was informed that she would have to shoot a scene where her character was being intimate with a man who later blackmails her with the footage. Sona said that her family was assured that it would be a small scene and will be shot in a private room and the extra footage would later be deleted. Cut to one year later, the entire raw footage recorded on the hand camera landed on the internet, particularly on YouTube.

This is not news to us. I am not sure if it’s the method that the authorities use or just their colossal lack of determination, but Sona’s is not the first case they have messed up. If they would’ve helped her and started an investigation, I suppose she would not have had to struggle for the last 6 years. It’s shameful.

Sona told TNM, “In 2014, I had approached the Ernakulam City Police Commissioner’s office to get the clipping removed from YouTube. The officials said that YouTube would take down the scene if they sent a request letter signed by the Commissioner. At the time, they did not lodge an FIR or take down a complaint.”

In 2016, two years after the intimate video of hers mysteriously landed online, Sona and her mother filed a complaint at the Ernakulam North Police Station. In this complaint, they named For Sale’s director, producer and editor as the accused. Sona says that during the shoot she had a tiff with the producer but it was nothing serious.

She said, “If you look at the context of the scene in the story, it was a rape. They told us that only a 30-second clipping will be used. The footage would not have leaked without their knowledge as they held the rights to it. Hence, adding them to the FIR seemed appropriate. I also requested in the complaint that the scenes be taken down from the internet. My complaint was transferred to the cyber cell and I was promised that action would be taken.”

The FIR lodged at the North Station only charged the accused under minor sections of IPC 500 (defamation) and the Kerala Police Actor section 119 (b) (taking photos or recording videos or propagating them at any place in a manner affecting the reasonable privacy of women). However, the accused were out on bail soon after their arrest because a few sections from POSCO were not added to the charge sheet. Seriously, what are the authorities doing?

Finally, in 2016 Sona approached the Kerala High Court with a writ petition. She asked for the footage to be erased from the internet and stronger charges to be added against the director, producer and editor of the movie, For Sale.

According to TNM, Sona is now a 5th year law student. This horrifying ordeal of hers came to light after she shared her experience in a video for the Refuse the Abuse campaign.

First of all, shooting a rape scene with a 14-year-old actor is in itself a horrid thing. Secondly, the director, producer and editor of the movie need to be investigated. They allegedly leaked footage of a minor girl getting intimate with a man. Why aren’t men ever held accountable? It’s shameful and unacceptable.

More power to you, Sona!

Actor Dileep Has Been Accused Of Sexually Assaulting An Actress. These Actresses Have Shown Support But Some Have Retracted Statements