Diljit Dosanjh Photoshopped Himself Into Ivanka Trump’s Picture At The Taj Mahal. His Man-Child Antics Are Getting Annoying 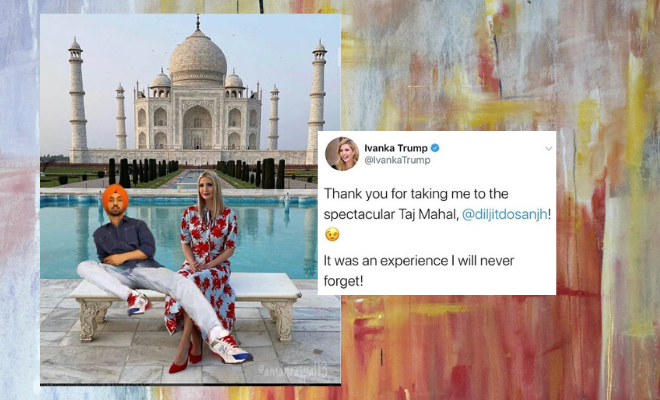 I love Photoshop, even though I barely know how to use it. The way you can take your imagination and pour it out on a digital canvas is intriguing, to say the least. And I would say it is Priyanka Chopra who made us all think that photoshop can actually be used as a cheesy tool to express love. How? Do you remember when the Jonas brothers won an award at the MTV Video Music Awards 2019, each one of them reached for their partner but Nick was captured standing alone and very much missing PeeCee? She did the cutest thing ever and photoshopped herself into the image to show she was present in spirit. It’s really adorable but when you’re in a relationship and  with the person you’re with takes you to places, digitally.

But clearly, singer and actor Diljit Dosanjh is oblivious to this concept and took his fanboying to a whole new level. He has been lame with expressing his crush on Gal Gadot, Kylie Jenner and Dua Lipa earlier so I wasn’t entirely surprised with what he has done now. Remember the song he made on Kareena Kapoor and Kylie Jenner, while he says nothing about his wife? But I am still a little surprised because this is a new low, even for Dosanjh and his man-child antics.

He photoshopped Ivanka Trump and himself sitting in front of Taj Mahal, the iconic symbol of love. He shared the picture on Twitter and wrote that Ivanka insisted him to take her to visit the Taj Mahal during her visit to India and so he had to. This is so bad that it’s funny!

Thank you for taking me to the spectacular Taj Mahal, @diljitdosanjh! 😉

It was an experience I will never forget! https://t.co/VgqFuYBRIg

But the icing on the cake was Ivanka’s mature and sarcastic reply to his rather lame post. Retweeting his post, she wrote, “Thank you for taking me to the spectacular Taj Mahal, @diljitdosanjh! It was an experience I will never forget!”

I appreciate the warmth of the Indian people.

…I made many new friends!!! https://t.co/MXz5PkapBg

Now I am pretty sure he wasn’t expecting his crush to respond to him and from his next tweet I can imagine him hearing violins in the background. He jokingly tweeted telling all those people who pointed out the obvious (that it’s a photoshopped image) that Ivanka responded which somehow makes the picture legit. I am taking this as a joke, Dosanjh. I really hope you’re joking because at this point I don’t know what to expect from you anymore.