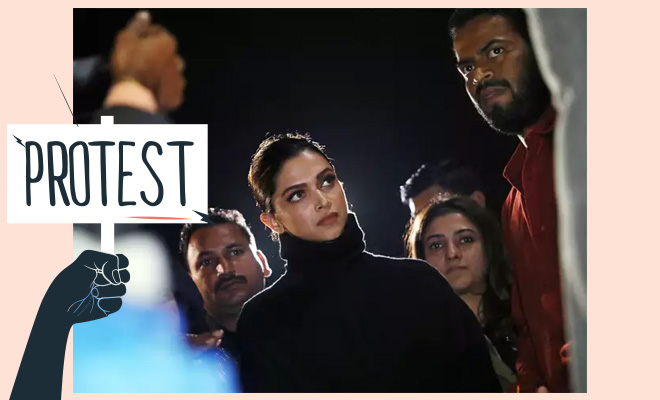 Deepika Padukone Turned Up At The JNU Protests. Here’s Why We Think It Wasn’t To Garner Publicity For Chhapaak

One thing that almost always helps you get through the tough times in life, in my experience, is support. It’s not possible for people to always give you the perfect solution or have the right words to say to you at all times, but that’s the thing about support. You can offer it without saying much, and more often than not, that in itself, is enough. As it was when Chhapaak actress Deepika Padukone decided to stand in solidarity with the protestors in front of JNU against the recent violent attacks that took place on innocent students and faculty members.

For the longest time, Bollywood had kept a low profile and their sense of patriotism has been limited to shouting slogans in movie scenes as the tricolour flutters aesthetically in the background. But as things have started gaining momentum, the industry has finally decided to give up vow of silence and we are glad that Deepika Padukone, is one such celebrity who has finally come through. Or has she? This is a question running in the minds of a lot of people. Showing up at the protests in front of the JNU campus, Deepika came to stand in support with the students and while we are tempted to speculate it yet another publicity move for her upcoming movie Chhapaak, we can’t help but ignore the fact that she in deed has a lot to lose by doing this.

Also Read : No Female Bollywood Celebrity Showed Up For A CAA Discussion And It Shows How Little The Women Of Bollywood Care

She was in the capital city for promotions of her movie where she will be seen playing the role of an acid attack survivor. The violence at JNU, an incident that occurred while she was there became something people couldn’t ignore. And so maybe it could be true that Deepika Padukone making an appearance at the protest side was all a gimmick to promote her movie.

Thank you @deepikapadukone for giving this movement a mainstream narrative. For using your position to choose the correct path. It always comes to the women and yes, they do deliver! Big love sister! #WeAreWithJNU #noplaceforfascism

@deepikapadukone When she was attacked over Padmavat very few came forward to support her. She knows what it feels to be targetted and she has shown exemplary courage by supporting the JNU students with quiet grace,More power to Deepika Padukone

But with a reputation like that, showing up at a protest, on the risk of being mobbed herself, considering the crowd was too much to handle if anything had gone wrong, we are forced to acknowledge the fact that maybe she did really care about the cause more than her own safety and more importantly, than her film. And that honestly, says a lot about her politics on this matter.

Standing strong with fellow citizens and consoling the JNUSU president, Aishe Ghosh, Deepika did not address the crowd, but her being there speaks for itself. A move that has divided the public’s opinion of her, considering while many laud her for being as much a citizen as a superstar there are quite a few who are condemning her because she’s using this to further her commercials.

That’s the thing. She has so much to lose. She’s picking a side which means that people who consider her anti-national will boycott her movie. Which could severely affect collections. It could also mean that Chhapaak won’t get the opening it probably deserves but perhaps her conscience has won. In fact, the slamming of the actress has already started.

This isn’t the first time Deepika will be at the receiving of hate. When her movie Padmaavaat was releasing, entire groups had protested against it, boycotted it and threatened her. She stood firm then.

RT if you will Boycott Movies of @deepikapadukone for her Support to #TukdeTukdeGang and Afzal Gang pic.twitter.com/LN5rpwjDmT

#boycottchhapaak
And make it disaster at box office
I cancelled my ticket
And please do cancel your ticket or don't book it.
Let's teach them a lesson. pic.twitter.com/3fR0PUUiR6

Country is important for me not actress who stands with anti nationalists.. #BoycottChapaak pic.twitter.com/leYBzxxi0K

This is my final decision that I will never watch any Film of these actress who Support anti nationalist goons😡😡#boycottchhapaak pic.twitter.com/sO1uEBz1AU

Earlier, during a promotional interview, Deepika had mentioned how what is happening pains her and because she hopes that this does not become the new normal with people saying anything and getting away with it.

In fact, receiving a lot of hate from people who are now calling her an anti-nationalist for her move to stand in support of the JNU students, her taking this stand is nothing short of a bold and brazen move that proves, at the end of the day, she won’t let the star status divert her from what she believes in.

And for that, we respect the actress. Maybe it was a promotional gimmick, maybe it was driven by true sentiment, but it doesn’t really matter because in the longer run, turning up showing a spine at a time where many have gone silent, her actions will only catalyst and that’s more important in these times.

Also Read : Guys, Bollywood Does Have A Conscience. A Few Of Them Turned Up To Protest. The A-Listers Weren’t There