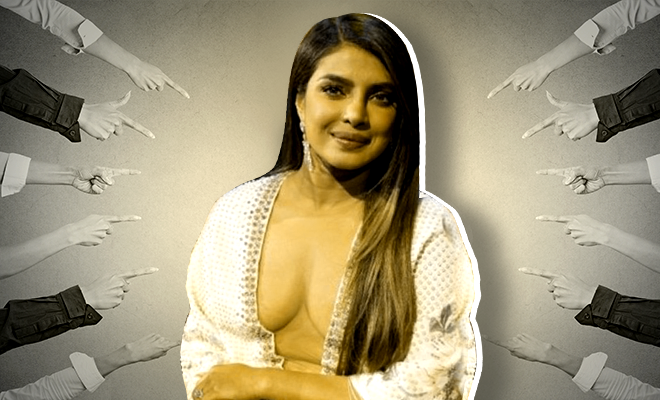 Dear Internet, Rolls On Women Are Normal. Can We Stop Slut Shaming And Body Shaming Priyanka Chopra For Her Grammys Dress Now?

Every time that I have to step out, I have to consider the fact that I live in a country like India, where the phrase ‘Don’t judge a book by it’s cover’, is invalidated by a ‘Judge a woman by how plunging her neckline or short her dress is’ kind of mentality reigns supreme. I have to be extra careful about the clothes I wear. And as demeaning and hypocritical it sounds coming from a modern day woman, who fights for feminism every day, it is the sad truth of life. Because at the end of the day, no matter the protests, rape cases reported, or even education about consent and intention, people continue to make quick and superficial judgements about women based on what they wear. As has recently gone down with the global superstar and actress, Priyanka Chopra Jonas after her appearance at the Grammys.

Sporting a Ralph & Russo white gown at the prestigious 62nd Grammy Awards, the Sky Is Pink actress decided to step up in a rather bold white gown, that raised a lot of eyebrows. The neck that went plunging till as deep as below her navel, created quite a buzz across platforms, out of which half the people lauded her for her risque and high-fashion look, while the other half saw it as an opportunity to body shame the actress for showing too much skin.

First calling her out for trying to pull off a look by singer and actress Jennifer Lopez from the Grammys back in 2000, to then nit-picking on details of her dress and dissecting it piece by piece, the internet and netizens have been far from nice. Out of the many names and comments that were hurled at her, people went to the extent of calling her ‘vulgar’, and saying things like, “do not have the body to wear something like that”  or dropping comments like, “Sharm Karo thodi to Yaar…you are pride of India. Itna nangpuna theek Nahi. Bhagwan Jo muh dikhana Hai ek din.” (Be ashamed, you’re the pride of India. This much skin show isn’t okay. You’ve to face judgement in front of god)

Clearly, this was too good an opportunity to pass on, people were quick to hop on the body shaming train, and didn’t think twice before zooming into her pictures to point out the ‘tummy tyres’, which by the way are as natural as ever, and even come up on the most slender person while sitting down. Having always measured celebrities against unrealistic beauty and body standards, we have scrutinised every part of their being so much and to such an extent, that we feel entitled to commenting on it left, right and center, not realising how unnecessary and unhealthy it is.

People really need to agree to disagree with choices that do not concern them, and at the least be respectful and decent about it. At the end of the day, no one is perfect and no one wishes to be either. There are all kinds of people out there, with different body types and choices, each as beautiful as any, and to be shamed over it is not just uncool, it is unacceptable. It is about time people accept that, because clearly, strong headed women like Priyanka Chopra, will anyway go ahead and do what they please . There is no stopping the women of today. Not anymore.

Also Read : Priyanka Chopra’s Grammy Dress Has Sparked A Debate About Body Shaming Vs Fashion Critiquing And There’s A Difference