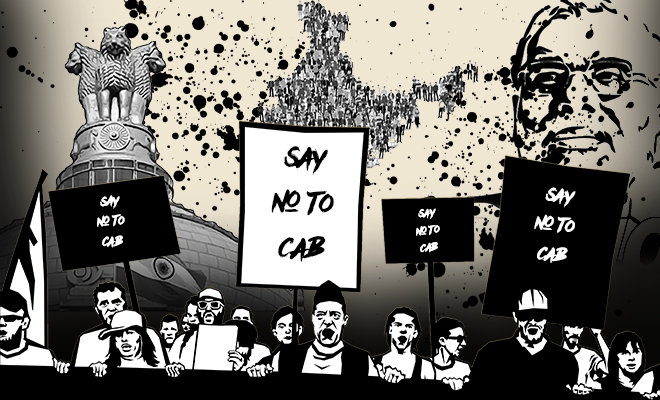 I Attended My First Protest Against CAA In Mumbai And It Was Empowering. I Would Encourage Everyone To Speak Up

The year 2019 seems determined to end on a memorable note. No matter the outcome of the current anti-CAA protests, the year will go down as one of the most influential periods of time in Indian history. For context, The Citizenship (Amendment) Act, 2019 was passed by the Parliament of India on 11 December 2019. It amended the Citizenship Act of 1955 by providing a path to Indian citizenship for Hindu, Sikh, Buddhist, Jain, Parsi, and Christian religious minorities from the neighbouring Muslim majority countries of Pakistan, Bangladesh, and Afghanistan. Muslims have been excluded. The act marks the first time religion has been used as a criterion for citizenship under Indian law. The subsequent nationwide protests have become common knowledge among all sections, age groups, professions, and states. Making this the first cause is a recent memory to have such a uniting effect among the youth of the country.

I was at my personal best when sh*t hit the fan. Janta started speaking out against the bill, right when the clock struck midnight on my birthday. I started seeing Insta stories and Twitter notifications from my friends and family talking about it and dove headfirst into the details of the same. I have always been someone who takes her time to weigh in the facts and it took me a while to decode what the bill actually meant and what it’s repercussions could possibly be.

Then came the outrageous revelations about the protests in Assam. As someone who has spent some of my best years living in this beautiful state, my heart ached to see them suffer. I have dear friends who live there with their families and to see their lives being upturned overnight was terrible. For editorial purposes, I will leave my personal opinion out of this feature. This was followed by the bone-chilling scenes form student protests in JNU and Jamia Delhi. I was enraged. I craved the chance to be a part of this monumental time, because, if I don’t speak up, who will?

As a Mumbaikar, we often get flak of taking it easy and being too “self-involved” in our own lives and livelihood. Which I started to feel was true but soon enough, the protests reached Mumbai, which got me excited. I felt fortunate to finally be able to be part of this movement, leading me to attend my first anti-CAA protest in the city. This also happened to be the first time I ever witnessed an organised protest and experienced a rollercoaster of emotions.

We are protest ready! Are you? See you at Carter Road this evening and Azad maidan tomorrow Bombay. ✊🏾 pic.twitter.com/lIXP2wl869

If you’ve been following #MumbaiAgainstCAA on Twitter, you’d know that the city has come alive with both large-scale and smaller protests in different pockets. This is a big city, which means that it can pull large numbers in one single protest. The people know this, and so do the police. Which is why I decided to attend one of the smaller protests in order to get familiar with it. I also did not find anyone to go with but didn’t want to wait for company either. This lead me to the Carter Road, Bandra peaceful march on December 18th. I was looking forward to it all day.

ALSO READ: Vir Das Pointed Out That The Entertainment Industry Will Not Stand With The Jamia Students. We Share His Sentiment

In my 50 minute ride from work to the protest site, I couldn’t find a single second of quiet in my mind. I was freaking out a little, I was going alone after all. I knew that there will be people who were there for a common goal, but how many of them could I trust with my own safety? With so many conflicting reports coming out of fake protesters and paid-off thugs disrupting peaceful marches across the country, I got nervous. I almost told the kaali peeli driver to turn around and take me back. But call it divine intervention, a diversion took me to a bottleneck traffic jam, and I had to get down and walk to the protest site as it was the only way out. I was meant to be there.

The moment I got there, I was met with a sea of cops who were deployed to stop any unlawful activities at the site. It is safe to say that I had never seen so many uniformed cops collected in one place ever. I was scared. There was yet another moment of doubt that caused a panic, I almost lost all will to stay back and wait for other protesters to show up (I was early, always am). I hated this fear that had suddenly taken over but was steadfast to see this through.

The Rush Of Adrenaline

But as I saw more people stepping down from autos, all of them with stern resolve on their faces, I forgot why I was scared in the first place. My eyes fell on this girl who was sporting fiery red hair and suddenly I felt calm. The moment of calm was followed by a rush of adrenaline because I could see more and more people coming out and just casually sitting on the steps like it was NBD. I felt I was back at a college fest, witnessing the event head dole out duties to sleep-deprived students. These people weren’t there to burn buses and destroy property, they were there to have an open dialogue and share ideas.

Scenes from the protest at Carter Road today.

The Best Kind Of High

Post the incidents at Lucknow and Delhi colleges, the narrative of anti-CAA protests has shifted, unfortunately, and we’re being told that any protest can escalate to being disruptive and violent. NO. We were not disruptive and violent last evening. Chants of ‘Inqilab Zindabad‘ and “Say No To CAA” filled the air with a lot of energy, which was never chaotic. In a first for Mumbai, people even came and dispersed on time! There were impassioned speeches by people who had something to say, phone torches were lit and innovative signs only pointed to people who believed in something. I was filled with ecstasy, I was among people who were determined to see their beliefs have a win against what seems like a very suffocating rule. There was nothing to worry about.

I understand that I am at a privilege to have witnessed a very civil and organised protest. But even then, there is still a lot to get done and many more gatherings to look forward to. People like me, who doubtful at first to attend one, need to just take that first step. Fear is never a nice colour to wear anyway. You never know where you find the strength to change the world, one slogan at a time!

Alia Bhatt Wanted To Show Support But Ended Up Posting The Wrong Version Of The Preamble. Honest Mistake?