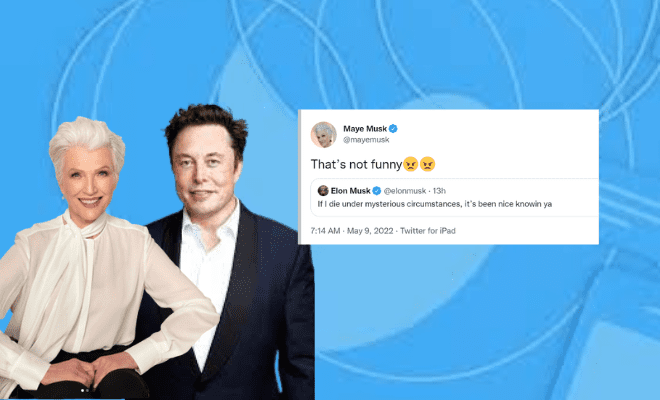 Elon Musk is known for his weird and sometimes hilarious tweets. He was all over the news when he bought Twitter for $44 billion. Now that Twitter is all his, we can expect him to be a lot more candid than he already was. Earlier today, Elon Musk’s tweet has again created a stir on the social media platform. Musk in his tweet talked about dying under mysterious circumstances. Strange right?

If I die under mysterious circumstances, it’s been nice knowin ya

This time even Elon’s mother, Maye Musk could not stop herself from reacting. Obviously, no mother can hear about their child dying, not even as a joke. Well, this tweet received a mixed response from Twitter users. Some expressed their concerns for Musk on this cryptic post, while others laughed it off.

However, Elon Musk did apologise to his mother over the tweet and further said that he will try to remain alive.

According to the source, the Tesla CEO’s mysterious death comes just a day after he shared a note allegedly sent to him by former Russian Prime Minister Dmitry Rogozin accusing Musk of collaborating with Nazis. Musk also claimed that the head of the Kremlin space agency sent a note to Russian media saying Musk is responsible for arming “fascists.” This seems to be more than we can actually see, right?

It is interesting to note that Musk may not be popular in Russia right now because he sent Starlink hardware to Ukraine to aid the Ukrainian government in staying connected to the world and the internet in the midst of the Russia-Ukraine war.

9 Legal Rights You Should Know As An Indian Woman