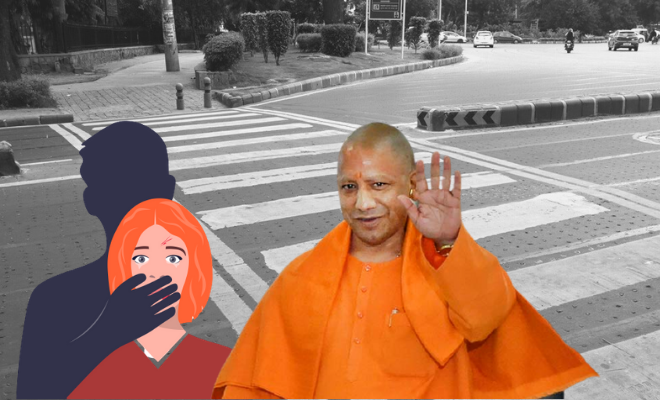 During this coronavirus-induced lockdown, we have seen a significant spike in gender-based crimes. From domestic violence to rape, the statistics are off the charts. However, this issue has taken a backseat and people seem to be more interested in Deepika Padukone’s Whatsapp chats than how women’s safety in our country is in the dumps. But today is a good day. For today, we are discussing how the UP government led by Yogi Adityanath is taking the necessary steps to try and curb the violence against women in the state. Look, it’s no secret that we need some serious reform in not only our methods to prevent gender-based crimes but also in our priorities.

You see, Uttar Pradesh is known for being unfriendly towards women. And that is putting it nicely. Incidents of crimes against women have drastically risen especially in these last few months. So, to combat it all and get those numbers in check, CM Yogi Adityanath had an extremely, I would say, out-of-the-box idea.

On Thursday, he issued directions to the authorities to put up posters featuring the people who have been accused of sexual harassment and other crimes against women at prominent road crossings across the state. This, I am assuming, is a way of not only making other women wary of these men but also instilling a sense of shame in the men. And let’s face it, we have all wanted to publicly humiliate these vile men, haven’t we?

Yogi Govt to display pictures of those guilty of crime against women at road crossings https://t.co/nGlKlxYV6G

An official spokesman said, “The CM at a high-level meeting in Lucknow on Thursday directed to put up posters of those involved in crimes against women at prominent crossings. He has also directed that those involved in such crimes should be punished by women police.”

Yogi Adityanath has also said that in case of any crime against a woman, police officers of the area such as the SHO and Circle Officer will be made responsible. This is a good thing because now the authorities will be held accountable, and hence, they will work harder and their investigations will be more thorough.

Additional Chief Secretary (Home) Awanish Kumar Awasthi has suggested that it’s essential to improve the image of women police officers so that other women can trust them. Another very vital point. He also instructed the authorities that any incident of mistreatment or assault must be stopped and strict action must be taken against the perpetrators. Well, you know the situation is bad when the Additional Chief Secretary (Home) has to mention that incidents of crimes against women need to be stopped. But hey, at least they are working on it now. Better late than never, right?

Also Read: Another Campaign Launched For Women’s Safety In Bengal. The Crimes Against Women In The State Are Alarming

The official also said that the UP CM has commended the anti-Romeo squads for their efforts and they have been made more active. For all those who don’t know, the anti-Romeo squad was made to control and keep incidents of molestation and harassment of women, particularly in public places, in check.

The statement said that since the constitution of the anti-Romeo squads, more than 83 lakh people have been checked at over 35 lakh places, including schools, colleges, markets, malls and parks.

These reforms have come in after leaders of the opposition raised serious concerns about the safety of women in UP and the general law and order situation in the state.

The fact that they are working towards curbing this problem is an achievement in itself. I just have one concern though. Is this enough? Crimes against women are so widespread and gruesome that I am not sure whether putting up pictures of the accused and increasing the anti-Romeo squad is enough. Though it’s a good first step, posters can be vandalized and torn down. It’s not uncommon. They need stronger laws and a much higher literacy rate. Education is the only way to change the mentality that holds patriarchy so near and dear. Yogi Adityanath needs to do more and fast.

This is just a baby step. When it comes to the safety of women, UP has a long, long way to go.

Telangana Police Will Have Pro-Women Safety Clubs In Colleges. We Think This Was Much Needed