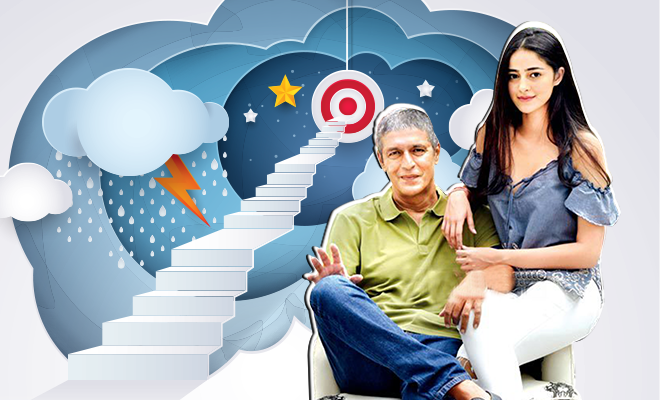 When kids are young, there are a lot of dreams and expectations that parents tie to their children. It’s not recommended but it happens anyway. Especially if you’re an Indian parent.  Some want their children to be a replica of themselves. Whereas others want their children to have a journey of their own and be their own person. I’m proud to say that I belong in the latter category. And I’m not the only one. Even Chunky Panday opened up about how he wants his daughter, actress Ananya Panday, to tread her own path.

Recently, in an interview, Chunky Panday opened up about what it is like to live in a house with two other celebrities – Ananya Panday and Bhavana Panday. Ananya Panday rose to fame after her film debut Student of the Year 2 and Bhavana Panday became a reality star after she featured in the Netflix show – The Fabulous Lives of Bollywood Wives.

Chunky Panday revealed that when he was the only actor in the house, there was hardly ever mention of work or what is going on in his professional life. But since the last two years, when Ananya Panday became an upcoming actress in the Bollywood film industry, the discussion revolving around work had increased quite a bit. And to add more fuel to this fire, with the release of Netflix’s The Fabulous Lives of Bollywood Wives and Bhavana Panday becoming a celebrity herself, most discussions in their house revolves around their work.

When asked about what Chunky Panday thinks about his daughter Ananya Panday’s journey, just like any other father, he was proud and happy about it. He went on to say that he doesn’t want to influence her in any way and want’s her to find her own journey as well as make her own mistakes.

Chunky Panday regarding Ananya Panday’s journey said, “I am happy for her as she is doing well, but she doesn’t discuss her work with me much. Occasionally, she would come and ask me if I like the script or ask my opinion on it. But that happens rarely as she is quite sure of what she wants to do. I also don’t interfere or sermonize much because I want her to be her, I don’t want her to be another Chunky. I don’t want to influence her as I am old school anyways. She will make her own mistakes and learn from them as we all do. She is going to have her own story.” And if that doesn’t make him the father of the year then I don’t know what does.

It looks like the Panday’s – Chunky Panday, Ananya Panday, Bhavana Panday, and Rysa Panday – have figured out the perfect recipe for a balanced household. The fact that he wants her daughter to make her own choices, decisions, and mistakes – is something that every father and parent should do. Giving your children space for them to figure out who they are and what they want to be, is a journey for your children to take up and not the one that a parent has to decide. As a parent, I think the best you can do is to stick by them through all their ups and downs.