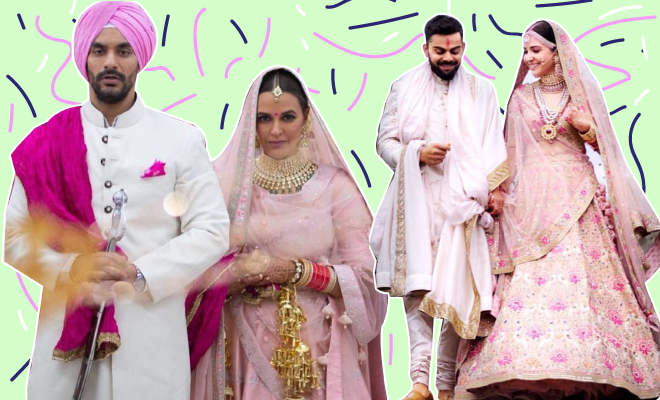 Bollywood Actresses Who Hid Their Wedding

Okay everyone, let’s settle down. Take your seats. You can put your phones down, no one is now glued to Instagram for the wedding update. The show is over, the couple is married, the decor has been taken down, and is being used at another wedding venue already. Sonam Kapoor even changed her name on Instagram, and if that doesn’t make it legit, I don’t know what does.Sonam Kapoor’s wedding had all of us at the wedding, uninvited. We partook in the festivities, judged people’s clothes, and memorised some steps from Karan Johar’s performance. We simply didn’t get to eat and drink at their expense.

With Sonam Kapoor’s wedding, we knew all the details and we lapped up all information. I guess we needed to recover, as a nation, from being shunned by Virat Kohli and Anushka Sharma wedding. And the announcement was grand. But it wasn’t always like this in Bollywood. In fact, for a long time, weddings happened in secret. Here are a few Bollywood actresses who got married, but didn’t tell a soul until much, much later. Except their husbands of course, ’cause they need to be told.

The popular actress hid her wedding to Boney Kapoor from everyone. However, this might not have been because of her career, but because of Boney Kapoor still being married to his first wife. The couple got married when Sridevi’s baby bump started showing.

She was the nation’s sweetheart delivering one blockbuster hit after the other, when she decided to leave it all and move to the US with her husband Dr. Sriram Nene. The couple got married in a quiet ceremony in the USA, but had a grand reception in Mumbai for the film fraternity.

The bubbly actress was tight-lipped about her wedding to industrialist Jay Mehta for a long time after the actual event took place. A series of unfortunate instances with Jay losing his first wife, and Juhi losing her mother and brother was probably the reason to avoid a grand wedding. It was when Juhi was pregnant that they finally announced their marriage.

Speculation was rife about Rani and Aditya Chopra dating. But they neither confirmed nor denied anything. In 2014, the couple announced their wedding, and though official, the couple remain elusive, rarely seen or photographed together.

In March this year, South Indian actress Shriya Saran tied the knot with her beau in a secret ceremony in Udaipur. The pair didn’t confirm the news but pictures of the couple in bridal attire gave them away.

Even as we are collating this article, news has come in that Neha Dhupia has tied the knot with Angad Bedi in a secret ceremony. The actress announced her nuptials with an Instagram and Twitter update.