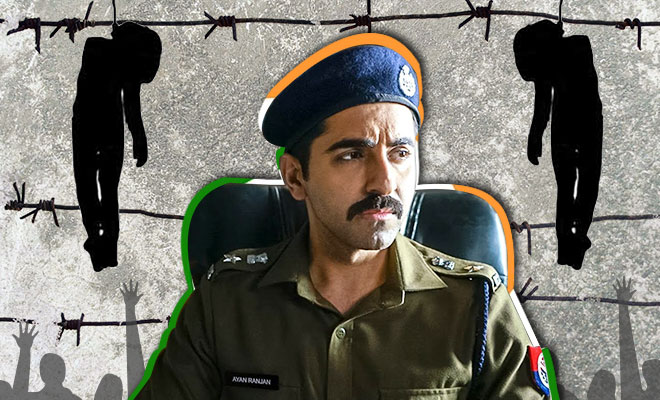 Article 15’s Trailer Brings Back Horrific Memories Of The Badaun Rape But It’s The Shake Up We Need RN!

We know Ayushmann Khurana picks up movies that are offbeat. But most of them till now have been fun, with a gentle reminder to the society about how judgemental we are. This new movie is a major departure from that.

Article 15 of constitution prohibits the state from discriminating on the grounds of religion, race, caste, sex, place of birth or any of them. But the question is, is the country really implementing this law? Does equality actually exist in our nation? The movie touches upon this important aspect- that equality is everyone’s right.

Director Anubhav Sinha is set to unfold this harsh realities of this with his upcoming film Article 15.

The movie is based on an infamous incident of 2014 Badaun gang rape. The case is referred to as such because the incident happened in the Budaun district of Uttar Pradesh. At the time, it caused quite the uproar because the victims of the rape were women of a lower caste and their families protested against the release of the perpetrators. It was as disturbing to read about it now and it was then. The movie is based on this incident and the trailer will give you goosebumps.

We see Ayushmann investigating a case of two girls getting raped and killed for asking 3 rupees extra wage, an offense that leads to their rape. Of course, there is the play of caste politics and Ayushmann’s character struggles to rise above it. It also highlights how thoroughly ingrained this is in our psyche that we are unable to see the truth.

The trailer will keep you hooked throughout with its storyline, hard-hitting dialogues and performances. We can’t wait to watch this. But more importantly, we hope that it will bring to light the plight of women who perhaps cannot speak for themselves. And using cinema as a medium is perhaps the best way to go about it.

What are your thoughts on the trailer?