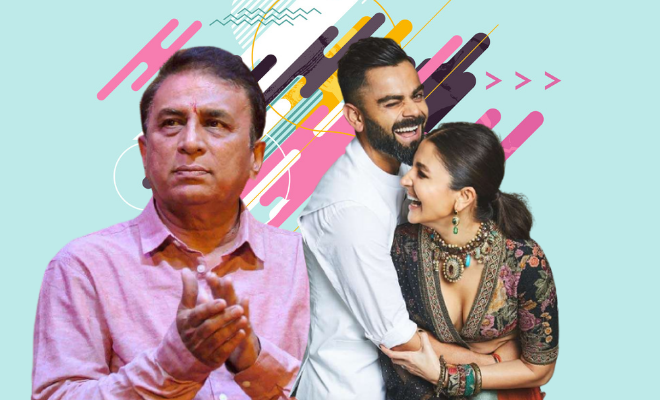 After millennia of human existence on Earth, it seems that women are only kept around so they can take the blame for men’s failures. That is of course when they are otherwise not occupied in enabling them and yet never getting recognised for it. A father fails to bring home bread, blames his daughter for being too hungry. A husband fails to stay faithful in a marriage, blames the wife for pushing him to infidelity. A brother fails to protect his sister, blames the sister for having called upon the tragedy on herself. And the most recent one, a sportsperson fails to perform well on the field, the wife is blamed for having him distracted. Again. Yes guys, the trolls are back on Twitter, featuring Virat Kohli, Anushka Sharma and some nasty digs at their unborn child this time around. Why? Because RCB lost an IPL match.

On Thursday evening, as the sixth match of IPL 2020 between Kings XI Punjab and Royal Challengers Bangalore was being aired on TV, almost as soon as Kohli dropped that first catch that would’ve sent K L Rahul back to the stands at 83 runs, I knew it was going to come back and bite him in the ass. Not only did K L Rahul continue to score a whopping 132 runs at just 69 balls (the first for an Indian cricketer in the IPL), he helped in putting up a hefty score of 206/3 for thee RCB to beat.

If only I could place a bet on my prophetic skills at the moment and not on RCB, I’d be a lot richer today than I was last night. You see, during the course of match, Virat went on to miss another catch that would have been instrumental to their team’s win. And things didn’t get much better after that either. Failing with the bat too, Kohli managed to make just one run off five balls before he was sent back by a delivery from Sheldon Cottrell.

Anushka : can we give ipl trophy as a welcome gift to our future child ?

Also Read : Virat Kohli Opened Up About Anushka Sharma’s Pregnancy And How Excited They Are. We Are So Involved In Their Story

Meanwhile, the netizens were getting ready to give off a rather unsolicited yet ever so predictable reaction to the Indian batsman and his wife. From trolls to memes to nasty statuses and even distasteful commentary on live TV, the power couple was suddenly being framed for failure from every direction. And we say ‘couple’ here and not just Virat, because clearly in India, a man’s failure is synonymous with the existence of a woman in his life. Suddenly, Anushka Sharma, who had absolutely no part to play in the match, was being held responsible for her husband’s performance.

If he was referring to Anushka bowling to Virat in lockdown or the other and the more controversial way, it is wrong to drag someone's wife in this totally unrelated matter. Moreover, after she's been targeted for many years. #SunilGavaskar #KXIPvsRCB

If he was referring to Anushka bowling to Virat in lockdown or the other and the more controversial way, it is wrong to drag someone's wife in this totally unrelated matter. Moreover, after she's been targeted for many years. #SunilGavaskar #KXIPvsRCB

In fact, chiming in with a rather off-putting dig at Kohli was Sunil Gavaskar from the commentary box, who remarked, “Inhone lockdown me toh bas Anushka ki gendon ki practice ki hai, (He has only faced Anushka’s bowling in lockdown).” A poor choice of words accompanied by a poorer sense of dragging the cricketer’s family into it. Because somehow, the two were magically related to each other.

While there were several people on the internet who slammed Gavaskar for his inappropriate words, there were plenty more who continued to fire at Anushka Sharma for being the reason Virat Kohli would’ve had a bad day at the field. Logic left the chat at this point.

Seeing Anushka trending, first I thought, NCB summons her too.
Then understood, in the world's "most uncivilized" country, a wife is trolled if her husband underperforms at work but never ever gets any credit if the hubby darling performs and Delivers.🤷🏿‍♂️pic.twitter.com/oGYWzvC1VE

RCB wins: *not a single person in Anushka's mentions*

RCB loses: Let me make Anushka memes or crack jokes on her since it will make me look cool

And this wasn’t the first time either. Whether she is cheering him on from the stands or not, Anushka Sharma has always been mercilessly linked to Virat Kohli’s performance in the field, with no regard for her own sentiments or the fact that she has no control over her husband’s form. When it’s a victory, she is never even talked about. But when it’s a loss, she is all people can pinpoint at for Kohli’s bad form.

However, this time Anushka was having none of it, and instigated by the unlikely and distasteful commentary by Sunil Gavaskar, she took to her social media to send out a blaring message to him and all the others who thought it was okay to drag her into this. She started by saying, “I have stayed quiet through all the times I was blamed for the performance of my then boyfriend, now husband Virat and continue to take the blame for the most baseless things involving Indian cricket. I kept quiet then.”

#AnushkaSharma sends out a message to veteran cricketer #SunilGavaskar after his remark on #ViratKohli’s performance during the #IPL game last night. pic.twitter.com/NityLDuNRl

Going on to share why she is speaking up now, she wrote, “Today. I have decided to speak up because someone’s silence cannot be taken as their weakness. I am not and will not be a pawn to be used by anyone’s thoughts or beliefs or agendas and next time you want to use my name to discredit someone or the board or even my husband, do it with facts and proof & leave me OUT of it.” It was about time, too.

Reflective of the Indian society and its problematic mindset, it is this instinct to level the blame for a man’s failure on the nearest woman, that needs to not just change but be eradicated altogether. What a man does professionally and how he does it should have no bearing on his woman,  just like a woman’s failures are never pinned to the collar of a man. It is really that simple and that mutually exclusive. And for those who still don’t get it, Anushka has quite literally spelled it out for you here.

Also Read : #Trending : Virat Kohli Credits Wife Anushka For Changing Him Into A Better Person. How Adorable Are They?