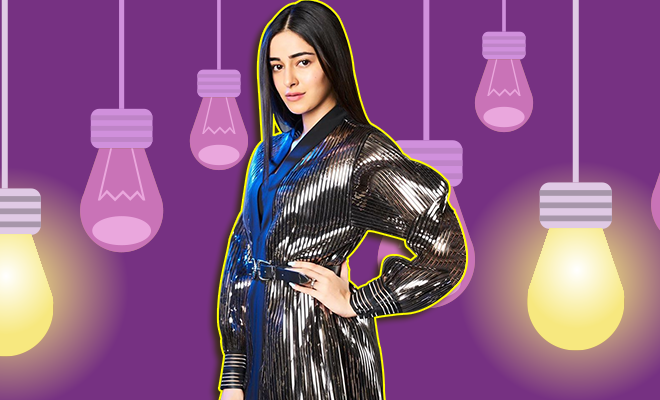 Ananya Panday Says No Filmmaker Puts Money On Someone They Don’t Believe In Even If They’re A Star Kid!

The debate over nepotism in Bollywood isn’t going to end anytime soon. Everyday, we hear and read about a new star kid making their Bollywood debut and even before their film releases, audiences write them off, often claiming that the kid needs no real talent to make it big, just the tag of their parent’s name. Which is true, to a large extent. They go easy access to great directors and bigger banners compared to the ones who don’t have a godfather/ mentor/ Karan Johar in the industry but not everything comes easy their way. Actress Ananya Panday, who is the daughter of actor Chunky Panday opened up about the struggles of being a star kid in today’s time.

Ananya Panday, who made her debut in Student Of The Year 2 feels that she was really fortunate to be born in a family of actors, who are known personalities in Bollywood. Although Ananya Panday had an easy entry in tinsel town she also believes that one must have what it takes to make it big in Bollywood. The actress who also made her Lakme Fashion Week debut this year also  said that no filmmaker would invest in someone whom they don’t believe in, star kid or not.

Ananya Panday wants to work with her father in a film but is waiting for the right script. “I am waiting for somebody to offer a film where I can share the screen with my dad. I hope someone offers us a film together. It will be too much fun. If someone is listening, please make something happen” Ananya said.

Also Read: Ananya Panday and Ishaan Khattar To Star In Ali Abbas Zafar’s Next Romantic Film And We Are Looking Forward To Their Chemistry!

On the movie front Ananya Panday will also be seen in a romantic film with Ishaan Khattar soon. Not much has been said about the film but we’re looking forward to their chemistry. Ananya Panday’s next film alongside Kartik Aaryan and Bhumi Pednekar, Pati Patni Aur Woh is slated to release on January 10, 2020!