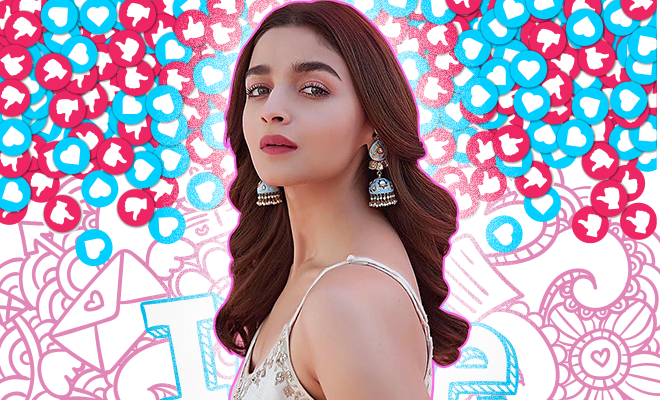 Alia Bhatt Refuses To Say ‘I Love You’ To Her Fans For This One Reason!

Alia Bhatt is one actress who has carved a niche for herself in a matter of just a few years. With her second movie, Highway, Alia Bhatt gained immense popularity and proved that she was definitely here to stay! The Raazi actress has won several awards and loads of love from her fans! Recently she revealed that she’s starting her own YouTube channel just to connect more with them. But she also confessed that she doesn’t believe in saying I love you to her fans, and that got us puzzled.

In an interview, while talking on whether the success or failure of film affects her, Alia Bhatt said, “What’s most important to me is my work process. To go to the set, study the character, do justice to it, understand the director’s vision… I should not pay attention to what happens after that — whether the film turns out to be a success or failure. What matters the most is to be completely honest towards my work. That will ensure that my screen characters stay with people.”

The actress added, “Am I No. 1, 2 or 3? These things aren’t significant. The best way to show my love to my fans is by giving good performances. I don’t believe in saying ‘I love you’ to them on Twitter. Agar picture nahi chali, I will be disappointed for the audience more than myself, because I will be content with the effort I put in.”

On the professional front, Alia Bhatt will be seen in the Mahesh Bhatt directorial, Sadak 2 alongside Aditya Roy Kapur and Sanjay Dutt. She will also star in Sanjay Leela Bhansali’s Inshallah, where she will be playing the role of Salman Khan’s love interest.