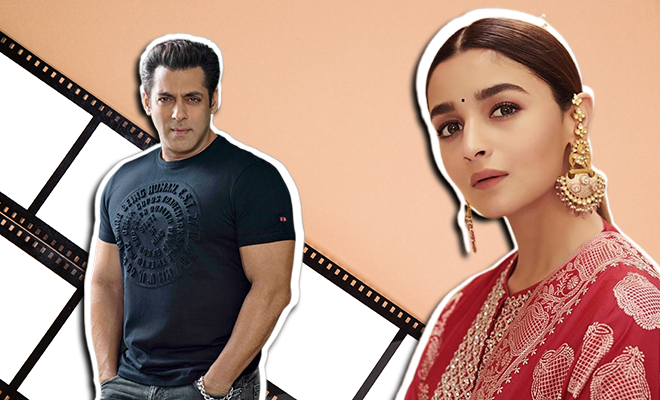 Alia Bhatt Is Excited About Being Paired With Salman Khan. Obviously! She Gets To Enter The 100 Crore Club

The reigning queen of Bollywood, Alia Bhatt is currently gearing up for her next film, Sadak 2, which will be directed by Mahesh Bhatt, and also stars Aditya Roy Kapoor. The Raazi actress, who charmed her way to our hearts by playing the role of Sehmat in Raazi, has some really interesting films in the pipeline. Alia Bhatt will be seen in films including, Takth, Sadak 2 and Salman Khan starrer Inshallah.

Also read: Alia Bhatt Just Wore A Pleated Number And It Reminded Of All Sorts Of Things. Except A Good Styling Day!

Speaking of her film Inshallah, Alia Bhatt apparently is really excited to be part of a project alongside Salman Khan. Inshallah is slated to release in 2020 and in the film Alia and Salman will be seen as partners who are smitten by each other despite their huge age gap. Talking about it, Alia Bhatt said, “I literally remember myself jumping. I was not in town, I was out of the country and I was doing something and I got a call and I was like.. literally I ran to the corner and I jumped up and down for 5 minutes because I was so excited.”

Next year will definitely be the year for Alia Bhatt as she will also be seen in the Ayan Mukherjee directorial, Brahmastra alongside beau Ranbir Kapoor. Alia also opened up on her upcoming projects and told the publication, “Next year is going to be very exciting for me because (I’ll be) working with Sanjay Leela Bhansali for the first time, with Salman, Ranbir, Ayan, Mr Bachchan and even my dad for the first time. Like (there are) a lot of first times. I really hope it goes well.”

Alia Bhatt’s character in Inshallah is really different than the ones she’s played earlier. In Inshallah, Alia will essay the role of an aspiring actress in her mid-20’s, who hails from a city in India. Whereas Salman Khan will be playing the role of an US-based business man who is a fun loving person and young at heart. According the the reports the films will also have a second female lead and in the film we might also get to see a love triangle between the three actors.

Also read: Alia Bhatt Says She Dresses Up For Herself, And We Think The Rest Of Us Should Too

Well, the second female lead is not finalized yet but we are looking forward to see Alia and Salman’s on screen chemistry in Inshallah. What are your thoughts on the same?

Tabu Is Excited To Do Jawaani Jaaneman Because It’s A Departure From Her Previous Roles. We Can’t Wait!