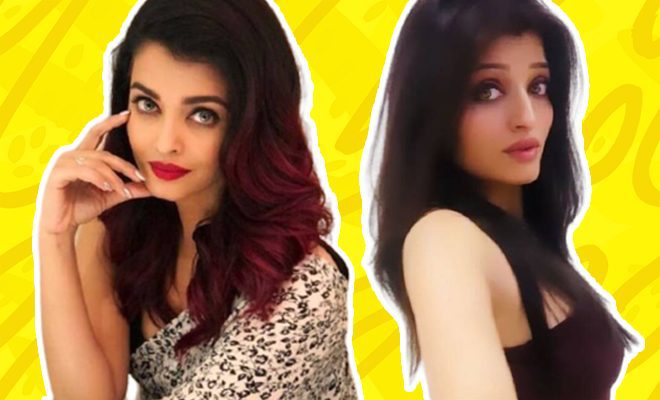 So, recently I was randomly using google  (yes, I randomly google things) and I came across a fascinating theory. The theory states that every person has 7 lookalikes or doppelgangers in this world. That means there are 6 other people out there with that same, adorable face as yours in the world. Crazy, right? And this is true for every single person – even celebrities. In fact, there are doppelgangers of celebrities that have instantly risen to fame just because they look like a celebrity. Take the example of Aashita Singh, she is one of the many doppelgangers of Aishwarya Rai that have got famous because of similar looks.

But Aashita Singh is not the only doppelganger of Aishwarya Rai Bachan that has gained instant fame online. Before her, there was actor Sneha Ullal, Manasi Naik, and Pakistani celebrity Aamna Imrann that also share a resemblance with the actress, Aishwarya Rai Bachan.

Coming to think of it, I wonder if it is weird for Aishwarya Rai Bachan to come across her own doppelganger. I often wonder how I would react if I met someone that looked like me. And the answer that I always came up with was that I would freak out. But I’m sure that’s not how others would react. Which brings me to the question: How would you react if you came across your doppelganger?