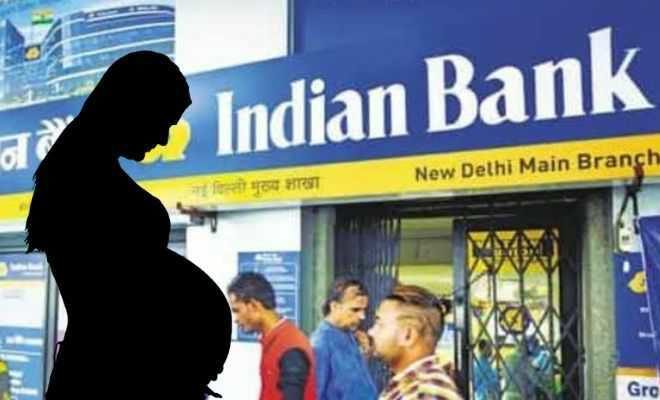 While women have slowly and gradually started getting education and work opportunities, I feel like it is still sad that many organisations don’t make their workplaces suitable for female employees. Moreover, some of them introduce policies which take away from the already limited opportunities that women in the Indian workforce have. The All India Democratic Woman’s Association (AIDWA) severely criticised Indian Bank’s “anti-women” decision not to hire eligible female candidates who are more than 12 weeks pregnant on June 15, Wednesday.

Indian Bank has created a new condition to its physical fitness rules, stating that a female candidate discovered to be pregnant of 12 weeks’ standing or more, as a result of tests, must be classified as intermittently unfit to work till the pregnancy is over. Additionally, six weeks following the date of labour, the candidate shall be re-examined for a fitness certificate from a medical professional.

In a statement, the AIDWA claimed that the Tamil Nadu Grama Bank (TNGB), which Indian Bank sponsors, has also issued similar regulations preventing women who are more than six months pregnant from joining with the condition that they are permitted to join only after 3 months of delivery and after undergoing medical examination. They further asserted that this archaic provision is extremely discriminating against women.

The State Bank of India, the country’s largest bank, made a similar judgement in December of last year. Following the considerable condemnation of the decision, SBI decided to withhold a circular that prevented women candidates who were more than three months pregnant from applying for jobs at the bank. The Bank Workers’ Unity had slammed SBI’s decision, calling it severe gender discrimination. A massive protest was held by AIDWA, CITU, BEFI, AIBEA, and parliament members from the CPM and CPI, as well as other democratic groups. The Delhi Commission for Women had also issued a notice on its own accord to the SBI chairman in this regard.

According to AIDWA, women’s employment rates are currently at their lowest level since independence. They pointed out that such orders given by the management of banks will further negatively affect job prospects for women. They then said that the number of female bank employees is at 25% which is shockingly low. The circular also breaches the Maternity Benefit (Amendment) Act of 2017, which requires the development of mandatory crèche (daycare) facilities in all industries employing 50 or more persons. The AIDWA says that this includes the benefit of allowing mothers to visit the crèche four times every day. They added that preventing pregnant women from working at the bank is a breach of their right to work.

Previously, women candidates were had to fill out a statement to medical examiners detailing their gynaecological history.  After passing the written test and interview, this form had to be filed. Although this condition has since been removed, similar retrograde and demeaning practices are currently being implemented by organisations, according to the AIDWA statement. According to sources, AIDWA said that reintroducing such retrograde measures is unacceptable. AIDWA asked that the Indian Bank management immediately revoke this anti-women policy.