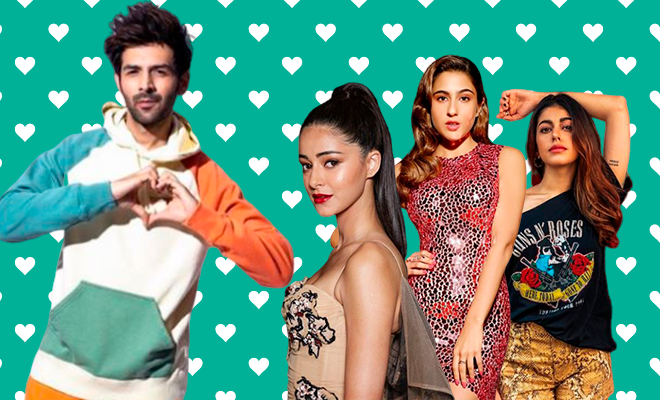 After Sara Ali Khan And Ananya Pandey, Alaya F Confesses To Having A Crush On Kartik Aaryan. Basically, He’s Every Debutante’s Crush

They say, everyone has a type when it comes to choosing or falling for a partner. For me, that type has to be one who is most likely elder to me, has a reasonable grasp over his grammar and is just as career-driven as I am. And it’s a fact that I rarely ever come across a guy who checks all three and isn’t a creep, so I am just going to put this tiny list away. But hey, I am always hopeful, wherever I go. And even if I don’t end up finding the one, I at least end up with a few harmless crushes. As does every other woman. Including the debutantes of Bollywood who soon after stepping into tinsel town, can’t help but start looking for their Mr. Right, and often end up crushing on the one and only – Kartik Aaryan – who at this point has caused our ovaries to shrivel up quite significantly.

Not too old in the industry himself, Kartik Aaryan entered Bollywood with a series of back-to-back hits and movies that were wonderfully relatable but not-so-wonderfully steeped in misogyny, a label that is now tagging along with him to all of his films till date. But in the movies, he’s been playing roles that peg him as cute and a chocolaty heartthrob that has some women flinging their panties at him.

And the recent one to hop on the bandwagon for #TeamCrushingOnKartik is the Jawaani Jaaneman actress, Alaya Furniturewalla. Making her debut opposite Saif Ali Khan and Tabu in this comedy-drama, Alaya F, who is the daughter of Pooja Bedi will be seen encompassing a role of Saif’s daughter in the movie. Set to release next month on 7th February, she’s in the news right now for a quite a few things including a passing mention of Kartik.

Rather snarky, blunt and yet likeable in her responses, Alaya gave a very candid interview with IANS, and proved that she is the kind to not hold back when it comes to talking about her feelings. The young actress admitted how, “I wouldn’t mind doing a steamy scene with Kartik Aaryan after watching the steamy scene between him and Sara in Love Aaj Kal’s trailer.” That would make two of us, then.

Further asking her what her reaction would be like if she ever found Kartik in her bed, Alaya said, “I wouldn’t be surprised if I woke up and found Kartik Aaryan in my bed,” and whether she is surprised or not, we definitely were with her straight forward reply. And clearly, she hasn’t been the first in the industry to admit to having the hots for Kartik, who has now legit earned the title of “A debutante’s crush” in the fraternity.

Back during the time of Koffee With Karan also, Kedarnath actress Sara Ali Khan also had admitted into finding him cute and confessed having a crush on him. Other actresses like Ananya Pandey and Sharmin Sehgal have too over time mentioned to have an admiration for the actor, and seems like there is no stopping this train.

When asked about actress Ananya Pandey and what does she feels she has but Ananya doesn’t, Alaya replied, “Ananya Panday doesn’t have a good answer to nepotism but I do.” Looking forward to her first release on 7th February, we can’t wait to see if her acting is just as impressive as her answers!

Also Read : Sara Ali Khan And Kartik Aaryan Are Fond Of Each Other Even After Breaking Up