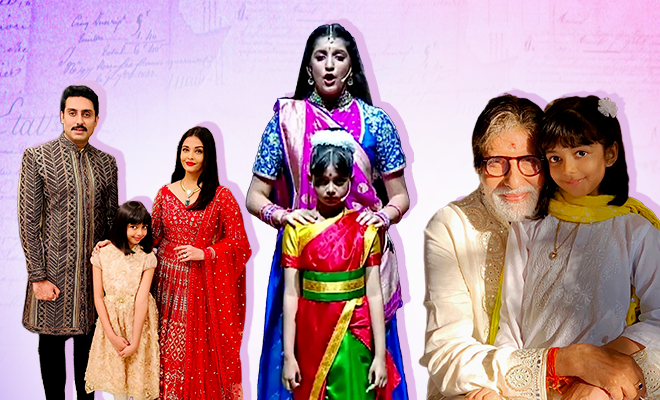 Most days, I like to be optimistic and see the glass as half full, or at least to be filling up. I know that today with the kind of gender-discrimination that we face – women who are working, have internet connection and can stand up for themselves – is  seen as privilege and it often doesn’t extend to all parts of our country. We, in our cozy cabins and with our pay disparity issues, are pretty oblivious to how deeply rooted this issue is. I am not saying, our struggles are small because they are not. What I am saying is that we have not made as much progress as we think we have made, if we look at India as a whole. And if it were to progress any further, we need to build an army of young strong-minded women and men to whom equality comes as naturally as breathing. Aishwarya Rai Bachchan and Abhishek Bachchan are doing their bit by encouraging their daughter Aaradhya to have a voice of her own.

For the uninitiated, Aaradhya Bachchan delivered a powerful speech on women empowerment at what her school’s annual function. In a video that’s now viral, Aaradhya can be seen speaking up as a young woman, while we get to see Amitabh Bachchan, Aishwarya Rai Bachchan and Abhishek Bachchan in the audience. Shah Rukh Khan, whose son AbRam attends the same school was seen recording a video of Aaradhya’s zesty recital.

So what was this speech that left everyone amazed? She says, “I am Kanya. I am the dream. The dream of a new age. We will awake in the new world. A world where I will be safe. I will be loved. I will be respected. A world where my voice will not be silenced by the ignorance of arrogance but will be heard with the understanding of wisdom. A world where the knowledge will come from the book of life flowing freely through the river of humanity. For we are Naaris, we are Kanyas. We are no less.”

the proudest moment and voice .. of the girl child .. of Aaradhya , my own .. https://t.co/Gsa9gBIgBA

It’s amazing by itself but coming from a young girl, it’s even better. Yes, perhaps she didn’t write it, but she delivered it with so much passion and there’s lot of be said for that as well. She makes me believe that if we raise our children right, the new generation will become the torchbearer of equality. We will have more independent women and more respectful men – only if we drill the concept of equality in our kids’ minds. Of course, at this point, most of us millennials aren’t even sure of getting married but if we reproduce we are going to make a bunch of cool feminist kids.

Amitabh Bachchan was really touched to see his granddaughter having grown up to be so cool. He shared her video on Twitter and wrote, “The proudest moment and voice…. Of the girl child, of Aaradhya, my own.”

Bollywood mommies seem to have been setting a great example for their children. Let’s see how this goes and where it takes us!

ALSO READ: 10 Women-Centric Movies And Shows We Absolutely Loved In 2019