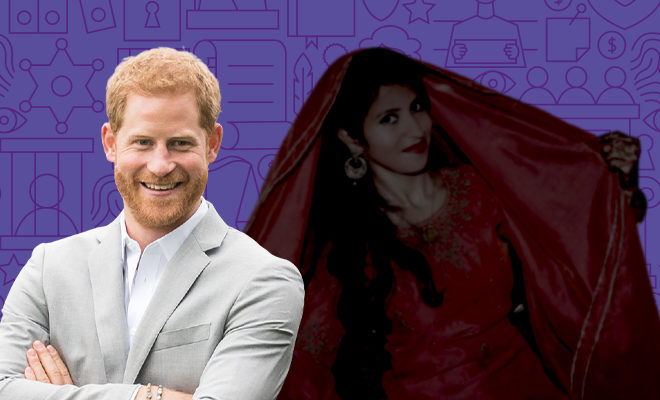 A Woman In Punjab Alleged That Prince Harry Promised To Marry Her, Takes Matter To Court

At the cost of sounding obsessive and a tad bit cuckoo, I will admit that I too, like many women out there, have had rather vivid fantasies about me being Cristiano Ronaldo’s love interest. I am so utterly involved with his life, in his game and with his social media activities, that I have to admit to having an unhealthy fascination for Ronaldo. It has come to a point where I have had our shower curtains picked out and memorised the vows for our wedding. And while that in itself sounds problematic enough, I would like to give myself credit for not going further overboard, like this woman in Haryana, who claimed that Prince Harry promised to marry her.

This Haryana woman has left most of us amused after she claimed that the United Kingdom’ Prince Harry had promised to marry her. Which of course, he left unfulfilled, considering he was busy marrying Meghan Markle and building a life with her.

In fact, the woman didn’t just stop at claiming something this unbelievable, she went ahead and filed a case against the Duke of Sussex for not fulfilling his promise that he made to the woman.

Of course, the Haryana Court where the petition was filed, did not take it seriously. They termed it as “but a daydreamer’s fantasy.”. Having inspired a ton of memes and jokes, the matter quickly gained traction on social media as netizens had their fun.

Also Read : The Most Explosive And Shocking Revelations Made By Meghan Markle And Prince Harry In Their Interview With Oprah Winfrey

What is even more interesting is that the woman filing the petition, Palwinder Singh, is an advocate herself and appeared on her own behalf in front of the court. It has been reported that further to this, the petition was poorly drafted and mentioned of emails that were allegedly sent by Prince Harry, wherein he had stated that he promised to marry the petitioner soon.

The court dismissed the stance as it observed, “This Court finds no ground to entertain this petition and can only show its sympathy for the petitioner that she has believed such fake conversation to be true. It is a well-known fact that fake IDs are created on various social media sites like Facebook, Twitter etc. There is every possibility that so-called Prince Harry may be sitting in a cyber-cafe of a village in Punjab.”

Initially I thought it's some Harry Bhai from Punjab.

Just what you need to kickstart a cold crispy morning! 🤣

First of all who is Prince Harry Middleton 🤦‍♀️

Meanwhile users milked the opportunity for some hilarious meme-making and comments that will leave you in splits. One user wrote, “I will also ask to take action against Taylor Swift, Scarlett Johansson, Margot Robbie, Kristen Stewart, Emma Roberts and Emma Watson for not fulfilling an alleged promise to marry me in Disneyland,” whereas another played along and sarcastically commented, “Thank God. No serious implications for Prince Harry. What a sigh of relief.”

Guess, another tete-a-tete with Oprah is required after a revelation like this!