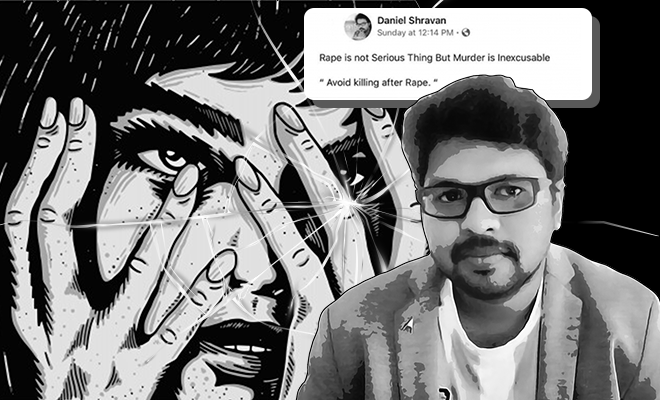 A Filmmaker Suggest Legalising ‘Rapes Without Violence’ To Avoid Murder After Rape. So That’s The Best Solution You Could Come Up With?

There would be a time when waking up every morning to the news of little girls being raped, slain and burnt alive would recoil me into a state of incredible anger and paranoia. A time, when every time that I would come across a case of rape (which is close to every other hour of a day), my blood would boil, making it hard to contain the aggression that kept building up. But then, I encountered some unfortunate incidents myself, which sadly was not a shocking revelation for I am a woman living in a fucked up world we call our home. But how do I feel ‘shock’ when there are news of sexual crimes every day? That shock has now gradually subsided into plain disappointment and helplessness. Why? because no matter how gruesome and ugly things get, no matter how many women get killed for the sexual whims of a monster on the loose, people still stand lost on the concept of rape. We say this after yet another man has come up to offer some great advice to the women of this country in how they can prevent being killed at the hands of their rapists – by carrying condoms.

Also Read : Dr. Priyanka Reddy, Played By All The Rules And Still Ended Up Getting Raped And Burnt To Death. When Will This Ever Stop?

From once being warned to carry items that could be used as weapons in case of an attempted assault, to now being advised to carry condoms to offer cooperation to the rapist, in the hopes that he pities us and leaves us ravaged yet alive, it feels like we’ve hit a new low. A filmmaker Daniel Shravan, conveniently dismissed rape for corrective punishment and called murder the real heinous crime.

Daniel Shravan recently took to social media to offer a few words of wisdom to the womankind. He wrote things like, “Rape is not a serious thing but Murder is inexcusable.” He then went on to defend his lewd mindset by writing, “The society and Women organisations are real culprits for engendering the evil thinking of killing the rape victims after raping them.” Does he think we women walk out of our homes every day screaming for men to rape us and then provoke them to kill us in the process? Such a shame!

Ideas going around.
Some of this content is in Telugu. Basically the ideas these men have given is – cooperate and offer condoms to prevent murder after rape, women’s organizations are the reason for rape.
Rape is not heinous, murder is. pic.twitter.com/2eqhrQA02T

And if that wasn’t all, Daniel here went on and on in more of his posts that are now deleted, where he pointed out how the only way to prevent murder in this country after rape is by legalising “rapes without violence.” And here I thought I couldn’t get angrier than I already have been for years on end now. He wrote, “Murder is a sin and a crime. Rape is a corrective punishment. No justice is going to happen with Nirbhaya Act or Priyanka Act. The agenda of rape is fulfilling the sexual needs of rapists based on that time or mood.” And considering we’re women, he probably assumes that it is our sole duty of obliging to the moods of such men. Why else would he advise us to carry condoms? Because at the end of the day, according to men like these, women are born to cater to the sexual desires of the men.

You see, it is such instances, such very real and sickening mindsets of people in the country, of the men in the country that force the women to stay perennially angry, cautious and on their guard. Because the moment we look away, we either have men sneaking up on us in alleys or now in full blown social media posts, casually claiming for rapes to be legalised. How can someone in their sane mind suggest us to shut up and take it? With a condom, too. Basically, we’re being told that there is absolutely no other option left to stop the men, the real culprits, and the only way to not make it worse is by asking the women to submit to it. A classic move of once again absolving men of any responsibility, bravo.

Whoever this Daniel Shravan is: needs medical help, maybe some heavy duty whacks up his butt, will help him clear his constipated mind.
Infuriating little prick. https://t.co/z8WVpClKTC

Riled by such out-of-the-ass thinking, we weren’t the only ones raging red after reading this, as many netizens took a note of his ridiculous post and dropped in some well deserving comments and tweets for the man of the hour. Actress Kubra Sait wrote, “Whoever this Daniel Shravan is: needs medical help, maybe some heavy duty whacks up his butt, will help him clear his constipated mind. Infuriating little prick.”

In fact, when a user commented on how troubled the filmmaker was to be saying such things, Daniel Shravan dug his grave further down by saying, “If these adamant bitches didn’t consent to the proposal made by the rapists, they will have no other way but to rape them.” And that right there, seemed like the echoing voice of hundreds of men in the country, who refuse to see a woman for more than a body to fuck.

What is "Rapes Without Violence?" .
And this guy is not some anonymous profile.
He is a movie Maker goddamn it.#danielshravan pic.twitter.com/RefqsdI5I9

It was perhaps at this point, where he saw how people weren’t backing down on calling him out on his derogatory and honestly punishable views, that the sick filmmaker deleted all of his posts and issued an apology by saying how it was all part of the dialogues he was writing for a villain in his upcoming movie that he is directing. Sure, okay.

The fact that people feel safe enough to get away with not just committing these crimes but also talking about it and suggesting women to be complicit in having her body violated is what the real problem is. Don’t tell us what we should or shouldn’t do, save that word of advice for the men in the country. Because at this point, if we were to carry anything with us, so trust us god, it wouldn’t be a condom.

Also Read : Former CJI Suggests Marital Rape Should Not Be A Crime. We Think That’s Nonsense