7-Year-Old Rory Van Ulft Can Lift Weights Up To 80 Kgs In The Gym. I Struggle With Carrying My Own Body Weight 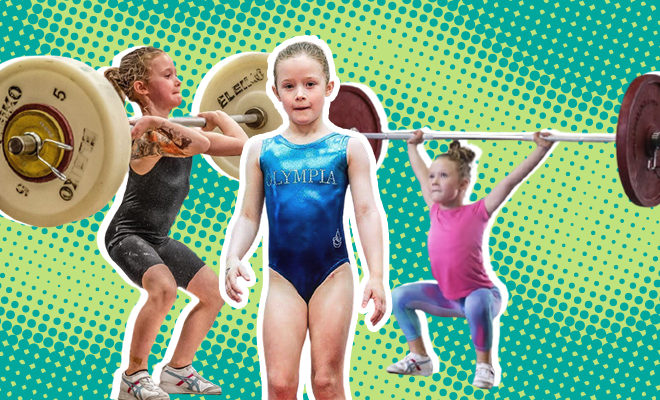 I weigh about 55 kgs, and the maximum that I have gone to lift in my life is my niece who is 8 years old, weighs about half my body weight and often climbs on me for a fun piggy back ride. Of course the fun is only limited to her. Meanwhile my big brother, who is regular gym-goer can easily bench press up to 150 kgs without breaking a sweat. And while society at this point would stop and take the moment to reinstate gender stereotypes, a 7-year-old girl , Rory Van Ulft, halfway across the world is waiting to smash them and how, for she, at the ‘tender’ age of 7 can lift up to 80 kgs.

No we’re not making this up, and yes, you can pick up your jaw from the floor. A 7-year-old impressive Rory van Ulft, has left most of us stunned and in curiosity as to how a mere seven year old little girl can lift weights up 80 kgs and without much of a struggle.

Creating a buzz on the internet, Rory began her training soon after her 5th birthday, where as all I was training for at the age of 5 was controlling my bladder so I don’t pee in bed anymore… Having bagged several awards already, this one has an Instagram account in her name, that is being managed by her parents and has some mind boggling videos of her doing lifts!

Also Read : Greta Would Love Her. This 14-Year-Old Girl Won An Award For Inventing A Solar-Powered Ironing Cart

Holding the title of ‘the youngest ever #usaweightlifting youth national champion’, as per the caption in one such videos where she has left us surprised as much as she has shocked, Rory is a child prodigy and also proof that girls are far from timid. In fact, at this age, she is probably stronger than most kids even thrice her age!

Her father also went on to talk about Rory’s accomplishments and said, “Based on her current Sinclair total, Rory is not only the strongest seven-year-old in the world. She is likely also the strongest seven-year-old girl or boy who has ever lived, for whom there are verifiable competition results.” And we are delighted to see that women, girls everywhere around the world are doing us proud and smashing stereotypes in full force!

Also Read : This 11-Year-Old Girl Walked 10 Kms To File A Complaint Against Her Father For Depriving Her Of Her Money. She’s So Brave