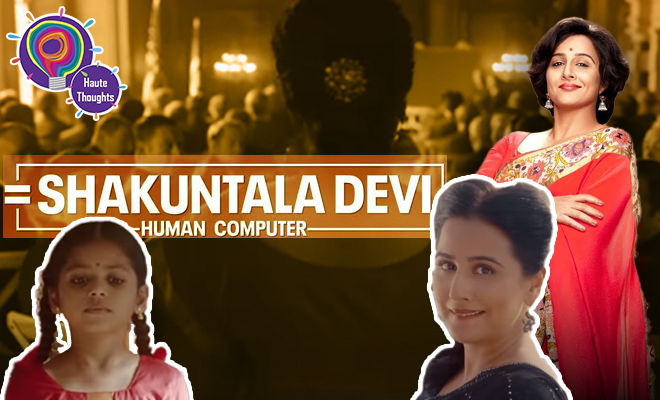 5 Thoughts I Had While Watching Vidya Balan’s ‘Shakuntala Devi’ Trailer. Mainly Ki, We Hope The Woman Behind The Legend Is Done Justice To

Full disclosure: I SUCK at Math. I knew I wanted to be a writer back in fifth grade because of my love for languages and storytelling, but mainly because it would involve zero math knowledge. And yet, in the periphery of my math-hating existence, I was aware of Shakuntala Devi, the human computer, mental calculator and Guinness World Record holder who would often visit schools for workshops and enthral her audience with what she could do. So when a biopic on her, starring Vidya Balan was announced, I was excited. Math + storytelling? Intriguing, bring on the Shakuntala Devi trailer already, I thought!

Thanks to the lockdown, Shakuntala Devi is all set to be the first Indian language biopic to make its global premiere on an OTT platform, on Amazon Prime Video on July 31, 2020. The trailer, which dropped on Wednesday, was preceded by lots of math puzzles posed by Vidya Balan, and those who guessed the answers got an early preview of the trailer. The film directed by Anu Menon (Four More Shots Please Season 1) and produced by Sony Pictures Networks Productions and Vikram Malhotra (Abundantia Entertainment), also stars Sanya Malhotra, Jisshu Sengupta, and Amit Sadh amongst others.

The film isn’t just about Shakuntala Devi as the undefeated human computer and math genius but sheds a light on how being a woman ahead of her time and living a life on her own terms created turmoil in her personal lives, particularly her relationship with her husband and her daughter.

And here are five thoughts that I had while watching the Shakuntala Devi trailer and Vidya Balan in it:

1. They got the casting equation right! Shakuntala Devi has always been described as a woman who spoke her mind unabashedly and was witty about it. And I think Vidya Balan pulls it off fabulously. She brings the right balance of confidence with a touch of hubris in her abilities, pride when she knows her answer is going to be right before they tell her it is, and a certain humility in knowing the burden of her fame. The rest of the cast is full of some brilliant actors  (Jisshu Sengupta is such a charmer always!), so I am going in with a lot of expectations on the emotional front!

2. From what I have read about her after the movie was announced (fine, on Wikipedia, sue me!), the film seems to touch on some of the most important events of her life, from the Guinness Book of World Records moment and perhaps her conversation with American psychology professor, Arthur Jensen, who studied her and published his findings in a scientific journal. Looks like the film’s covering all the bases.

3. Shakuntala Devi’s personal life was a tumultuous one. Being thrust into fame since an early age can change a person, and it definitely would’ve had some impact on her. There are several scenes in the trailer where Vidya Balan’s Shakuntala Devi is torn between her love for mathematics and raising her daughter. Sanya Malhotra is a great actress, and I look forward to seeing her and Balan bring out the vulnerabilities and toils of Devi’s life. It is always hard being a genius, but being a woman and a genius at a time that wasn’t as welcoming of female pioneers? It must’ve been hard.

Few people know that Shakuntala Devi wasn’t just a human computer but she also authored one of the first books on understanding homosexuality in India. I am curious to see if this plot point is also touched upon in the movie.

4. Vidya Balan, for the most part, looks like your typical Maths teacher from school, which is exactly how Shakuntala Devi seemed. But in some places, I detected a hint of a South Indian accent (again a trait you’d often see in Math teachers in school!), which I am not too sure about. She was born in Bengaluru and eventually moved to London before returning to India. But the accent seems fleeting and I hope there’s a good reason for it. That said, Balan’s infusion of OTT antics and humour is something I’ve usually found endearing (Tumhari Sulu), so I hope that’s the case here too. The one dialogue she says, “Jab amazing ban sakti hoon toh normal kyun banu?” touched my heart. Isn’t that what’s limiting most women from their true potential?

5. Biopics usually have a knack for whitewashing their subjects. Considering Shakuntala Devi’s life must’ve been an interesting one with its own follies and regrets, and this is a subject hitherto unexplored, I hope we get an unbiased view at her. The fact that the screenplay is written by Anu Menon and Nayanika Mahtani, and the dialogues are penned by Ishita Moitra, makes me optimistic that the female perspective will be highlighted.

One thing is for sure, though. There’s going to be lots of humour and drama, as Balan promises in the closing dialogue of the trailer. Indian movies are like this only. Drama or nothing!

Also Read: 5 Thoughts I Had While Watching The Trailer For Dil Bechara. Mainly, How Heartbreaking It Is