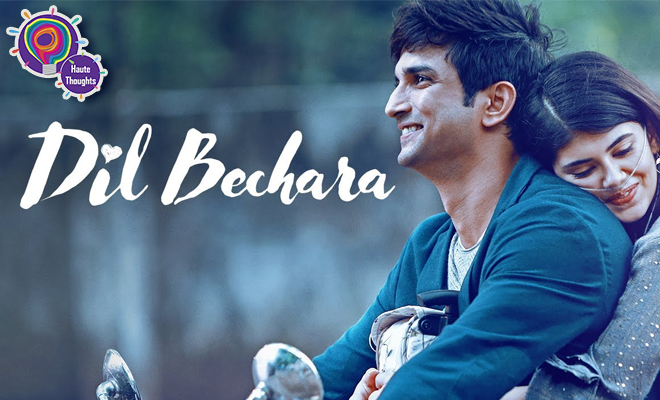 5 Thoughts I Had While Watching The Trailer For Dil Bechara. Mainly, How Heartbreaking It Is

Usually, I am not a fan of sappy rom-com dramas that give you unrealistic expectations of romance. However, all that changed when I watched Fault In Our Stars. It was super mushy but I loved the treatment of the love story. The story itself is the hero here as the book made me fall in love with it. This is why I was super amped up when I heard there was going to be a Bollywood version of the movie.

The movie I am talking about today is Dil Bechara, starring late Sushant Singh Rajput and Sanjana Sanghi. Though the events ahead of the release of the movie have been extremely tragic, the trailer looks intriguing. Since it is based on The Fault In Our Stars, the storyline revolves around two cancer patients who fall in love against all odds.

Here are 5 thoughts I had while watching the trailer for Dil Bechara:

PS: watch the trailer before you read on!

1. I know that most Bollywood renditions of Hollywood movies fail to meet the mark and the lack of originality is annoying. However, after watching the trailer for Dil Bechara, I know that it’s going to be one of those movies that we watch over and over again. Stories like these stay with you and strike a chord while being both adorable and hard-hitting. Though we all know the plot, thanks to its famed original version, I really think we will be able to connect with Dil Bechara more. And I am not saying this because a tragic loss surrounds this movie, it’s the truth.

2. Just like everyone else, my favourite thing about Fault In Our Stars was the “Okay? Okay.” And that was my favourite part about this trailer as well. They took a very hyped dialogue and instead of putting it verbatim, gave it a desi twist. “Cari” is Tamil for Okay. Is it only me or does “Cari? Cari.” have a much cuter ring to it? Maybe that’s where relating to this one better comes in.

3. Can we just take a moment to acknowledge just how adorable Sushant and Sanjana look together? I loved the opening shot of him dancing in his jersey. Every time they hugged, my heart raced a little faster. I knew that the experience of watching this movie was going to be poignant, given the theme and the storyline, but no one told me it would so heartbreaking.

4. My favourite scene in the trailer was the one at the end, where Sanjana’s character Kizie (I love the name!) tells Sushant that she is not his girlfriend. After asking her if that’s not true for now or forever, she says forever and he said, “chal jhuti” with the cutest expression ever. It’s these small aww-worthy moments like these that make a good love story, great. Wouldn’t you agree?

5. Do you see the bitter irony that this movie brings along with itself? Dil Bechara, Sushant’s very last movie is about living in the face of insurmountable odds and it’s being released right on the heels of his tragic suicide. This is the immediate thought that came to me when I heard the first dialogue of the movie, “Ek tha raja, ek thi rani. Dono mar gaye, khatam kahani”.  Who would’ve thought that this dialogue would be like a glimpse into his future? All through the trailer, the only thing that hits harder than this dialogue is Sushant’s charming smile.

Sushant Singh Rajput’s Death Has Pulled The Mask Off Of An Industry That Lives For Appearances. And The Stars Are Being Called Out