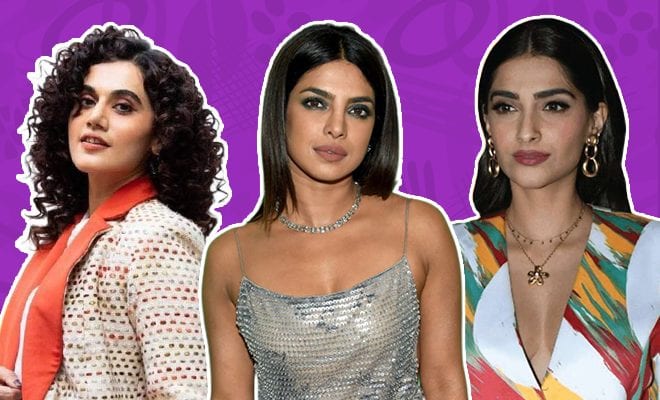 We’re always told to study hard and work harder in order to succeed. But it’s not that simple, is it? There are so many factors that prove to be massive hurdles on our way to success. For instance, no one ever teaches girls how to deal with the pay parity that exists in every industry. It’s no secret that gender pay disparity affects us all. Women are paid almost three times less than their male counterparts and most of us have just seemed to accept that. Although, this wage gap affects the women working in the Bollywood industry significantly more than the rest of us. This is why it shouldn’t come as a surprise that a lot of actresses have raised some extremely valid points about it. It’s high time Bollywood listened to them and adapts equal pay.

Here are five actresses who spoke out against pay parity.

In an interview with Vogue India, Sonam Kapoor said that the pay gap that exists between men and women in Bollywood is “ridiculous”. She said, “The pay gap is ridiculous. I can stand up to it, but then I don’t get those roles, and I’m okay with that. I can afford to do that. I realised over the past two or three years that I have no right to judge anybody. I’m privileged, so making difficult choices isn’t really f**king difficult.”

Recently, in an interview with The National Bulletin, Taapsee Pannu called out our entertainment industry. She said that male actors who started their careers with her are now being paid 3-5 times more than her. In fact, Taapsee also raised her voice to defend Kareena Kapoor Khan who was being criticised for asking for a pay hike in a Mahabharata adaptation.

3. Priyanka Chopra
Despite being a global icon, Priyanka Chopra is extremely vocal about the issues that plague Bollywood. Talking about the pay parity that exists, Priyanka said that it’s a universal problem and not only contained to Bollywood. She said in most business sectors, men are getting paid more than women and that is a massive problem. We completely agree!

4. Sonakshi Sinha
Talking about the pay parity that exists in Bollywood, Sonakshi raised some extremely relevant points. She said that Bollywood has a long way to go to achieve equal pay. Even the actresses who star in women-helmed movies don’t get anything close to what a male superstar would make for a role of similar importance. Sonakshi said that female-centric movies don’t garner the same amount of attention as a movie with a famous actor would and that makes all the difference.

5. Bhumi Pednekar
A few months ago, just before the release of her movie Badhai Do, Bhumi commented on the pay gap that exists between men and women in Bollywood movies. She said, “I want to see change not just in the kind of films being made but everywhere. Like the gender gap that exists, you know be it our pay scales, be it opportunities. I really hope that kind of reduces and diminishes. We have enough people who are working very hard from both the sexes. So that is definitely going to be my number one thing on my list of wants.”