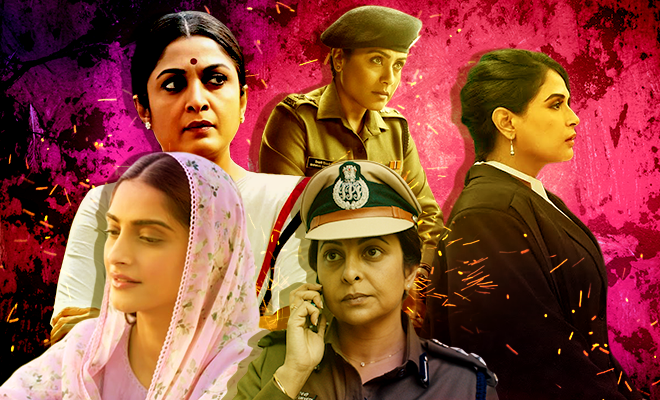 10 Women-Centric Movies And Shows We Absolutely Loved In 2019

It wouldn’t be fair to say 2019 has been the best year for Bollywood. While it has delivered some amazing movies, there were some terrible misses as well, and you might even agree with me on the same. Though this year, we saw a clear change in the kind of movies and shows that were produced. They were not only more women inclusive but also more women-centric, which we absolutely loved about Bollywood. We are glad that 2019 has paved the way for movies with strong women characters that are doing more than just conforming to societal norms. Having said that, we have compiled a list of 10 movies and shows that show women in a whole new, empowered light.  If you haven’t watched these, you must check them out

Taapsee Pannu and Bhumi Pednekar starrer Saandh Ki Aankh was definitely one of the most revolutionary movies this year. It was based on the real-life achievements of the two shooter dadis – Chandro and Prakashi Tomar who began their shooting career only after the age of 65. Taapsee and Bhumi did a phenomenal job bringing their respective characters to life. Though this movie was not without controversies, it managed to win over all our hearts. More than being a movie about India’s oldest sharp-shooters, Saandh Ki Aankh goes into the depths of socio-cultural changes, women empowerment and gender equality at the very grass-root level. If you haven’t watched this movie already, you really are missing out on something.

Also Read: ‘Saand Ki Aankh’ Is More Than A Sports Film. It Is About Women Working Together Towards Freedom.

Though Mardaani 2 released only last week, it is still one of the best female-centric movies we have seen all year. Rani Mukerji plays the protagonist, Shivani Shivaji who is a woman cop working in an extremely testosterone-fueled environment. The movie itself is a classic cat and mouse chase between Shivaji and a deranged serial rapist. But the larger issue it looks at is one of the established gender roles of how a woman should behave in order to avoid getting raped. Though this movie lacked the layers of the first movie, it was both effective and impactful anyway.

Ek Ladki Ko Dekha Toh Aisa Laga is an extremely underrated movie that had me bawling my eyes out. It has got to be one of my personal favourite movies this year. An untold love story between Sweety (Sonam Kapoor) and Kuhu (Regina Cassandra). The movie also features Rajkumar Rao who plays the beard in their relationship and helps Sweety convince her family to accept her relationship with Kuhu in the form of a play that he writes, which made me sob. The movie is very realistic and succeeds in depicting the struggles of two Indian women who are in love go through just to be acknowledged and accepted by their families. If you haven’t watched it, I will not spoil it for you but don’t miss out on this eye-opener.

This court-room drama feels like it is something right out a John Grisham novel. It is a power-packed movie with a crazy twist that gets you thinking long after the credits roll. Needless to say, both Richa Chadha and Akshaye Khanna have done mind-blowing jobs portraying the defense and prosecutor lawyer respectively. The movie is based on something that isn’t so uncommon in the entertainment industry – sexual misconduct. It talks about a filmmaker who has been accused of rape by a young costume-stylist. But nothing is ever what it seems like, is it? You will have to find it out yourself. Section 375 is the perfect blend of a gripping plot and a hard-hitting message about the different aspects of sexual misconduct. Watch it with an open mind.

Also Read: Richa Chadha Says Every Woman Will Relate To Her Role In Section 375 Because Harassment Is So Rampant. So True!

Soni is a woman police officer who is part of the Delhi police force in a world of misogyny and gender stereotypes. She is a hot-head and a repeat offender who forms an unlikely friendship with her superior officer, Kalpana. Though this show is named after Soni, the show is actually a character study of both the women. What we loved the most about the show is the narrative that gives them both the characters a whole lot of layers. They face societal pressure, demands of the job and bust through gender-stereotypes. If you want a show that answers your questions and gives you a solution to deal with the chauvinistic world, then this show isn’t for you. The power of this show lies in the fact that it does not sensualize the problems it just narrates.

There has been a lot of talk surrounding Queen, especially since just like the plot of the show, Kangana Ranaut too is coming out with a movie which is also based on the life of J Jayalalitha. But after watching the teaser for Queen, we can say without a doubt that this depiction of the late Minister will be more accurate. The reason for that is simple, where Queen relies on the essence of the story, Thailivi uses a lot of prosthetics and makeup to get its point across and nobody is watching the movie for prosthetics, right?  We are really looking forward to watching Ramya Krishnan as J Jayalalitha and be mind-blown.

Even though Mission Mangal has a male protagonist (what a disappointment), the plot development can largely be credited to the five female leads. Sonakshi Sinha, Vidya Balan, Kriti Kulhari, Nithya Menon and Taapsee Pannu who play an integral part in the movie as scientists. This movie has perfectly depicted what it is like to be a working woman in our society. They all struggle to balance their personal lives while of course working on a mission to send out the space shuttle from India to Mars. The brilliance of this movie comes from the fact that their lives aren’t glorified. If you haven’t watched this movie, I suggest you go and watch it right now.

The Kangana Ranaut helmed movie Manikarnika is a period movie that revolves around the life of Rani Laxmibai. Along with being a powerful movie, it is also one of the only biopics that has been made about a woman warrior who is revered even today as one of the greatest warriors in history. Kangana has done an amazing job as Jhansi Ki Rani and though it did not do as well on the box office, we need more powerful movies like this one.

Also Read: ‘Mardaani 2’ Is A Less Deserving Sequel To The Groundbreaking First Film, Yet Equally Shocking and Bone-Chilling

Delhi Crime is based on the police investigation of the Nirbhaya case. The protagonist, DCP Vartika played by Shefali Shah helms the manhunt that went down in order to ensure the preparators of the crime land behind bars. The show is not only hard-hitting, but it will also give you goosebumps to know the gruesome details of the Nirbhaya case. So, watch it at your own risk. The brilliant performance delivered by Shefali Shah added ounces more to the impact that the show was supposed to create.

Do you know why I loved Four More Shots Please? Because it boldly talks about things that are still considered “taboo” by our society. The show revolves around four best friends with wildly different personalities. They bring each other up and empower each other to be confident and themselves no matter what. It is shows like these that break multiple stereotypes and yet are super entertaining. I would suggest you grab your girl and watch this show.

Four More Shots Please! Gets A Season 2 And Here’s What We Are Expecting From The Show