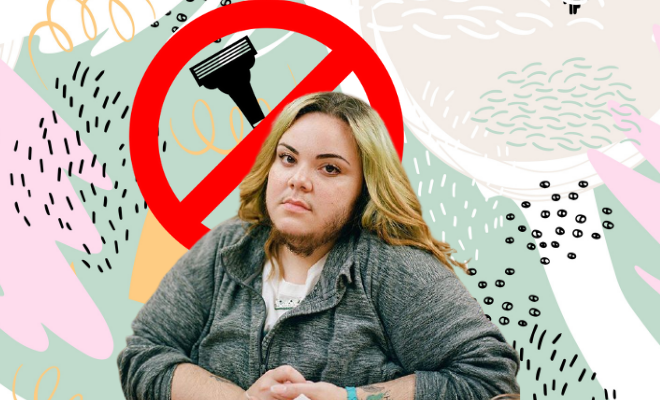 This Woman Has A Beard But She’s Not Shaving. What’s That Sound? It’s Her Smashing Beauty Stereotypes

This is probably the longest we’ve gone without wielding a razor and stripping body hair off our arms and legs, because, lockdown. But I am sure most women have found a way to get rid of their facial hair. But this woman has decided that she’s keeping her facial hair, this woman has a beard, not less. Generally, barring eyebrow and hair on the head, women having even tiniest strand on their face invites ridicule and revulsion. Because it’s not like hair growth on a human’s face is completely natural or anything. Oh, wait. It is.

It’s 2020 and we are still obsessed with women having smooth, hairless skin, while men can roam around with a hairy body and no one bats an eyelid Why, I asks ya? Why can’t we normalise women having facial hair or in fact body hair for that matter? These idealistic beauty standards from the 1920s are even harder for women going through hormonal disorders like PCOS. One distressing symptom of this condition, apart from you know irregular periods, weight gain and hair loss, is hirsutism which is excessive hair growth on the face. Women suffering from PCOS struggle with body image issues all their life and ridiculing and judging them for having facial hair makes things worse for them. Not to mention, it exacerbates this ridiculous stigma of women being hairless to look beautiful.

Some women are clearly not having it and showing middle finger to these beauty ideals. Instead of hiding their condition and shaving off their facial hair, they are embracing it like a bawse. One of these women is 27-year-old Alma Torres who was diagnosed with PCOS when she was 15 and had been struggling with facial hair issue ever since. This is a woman who has a beard. She tried every means there is to hide or get rid of pesky hair like waxing, shaving, bleaching even laser but nothing worked. After 8 years, not only she’s finally come to terms with her condition but is celebrating it. She has stopped shaving her facial hair and says it’s the best decision she ever made. As as Instagram handle says, she is beardiful!

She is now happily growing out her beard and loving her new look. She remembers the exact date she decided she is not going to succumb to the social pressure of looking a certain way and it’s been quite liberating for her. In an interview with Allure, she said, “The moment I decided to let my facial hair grow out was August 11, 2016. It was something I had to mentally and emotionally prepare myself for; I’d been wanting to do it for so long. I can honestly say that growing my facial hair was the best decision I ever made. I absolutely love my beard. It’s given me the confidence I never thought I would have.”

Also Read: Lilly Singh Shares Decisions That Were Her Acts Of Self-Love And How It’s Integral To Our Mental Health. Her Views Are So On Point

Recalling the journey and her struggle with PCOS, she said, “I noticed I had facial hair at a young age, maybe around nine or 10, but it never bothered me because I was focused on being a kid. I grow facial hair due to polycystic ovary syndrome. I removed my sideburns, which were really thick and dark, for my eighth-grade prom. In 2009, when I was working with children, I decided to bleach my mustache. That didn’t work, so by the end of the summer, I started to shave instead.”

The worst part for women with PCOS and facial hair is being mocked and judged by people who don’t know better. Women are “expected” to shave and if you’re a woman with a beard, like Alma is, it makes people uncomfortable that you’ve no time for their negativity. The unsolicited remarks and humiliating comments could really shatter your confidence and put you into self-doubt. But Torres found these comments funny and have noticed a change in people’s views now that she embraces her beard. “People’s reactions to me as a bearded woman are sometimes humorous. I’ve had people make side comments to whoever they’re with…I’ve had people say, ‘Yo, she has a full beard’ as I walk past, or ‘What is that?’ But I’ve also gotten positive reactions, like: ‘Your beard looks really dope’ or ‘You are sure rocking that beard, girl. Don’t change,’ she said.

Torres is not the only one who’s celebrating her facial hair and inspiring other women going through the same to accept and love the way they look. There are other incredible women with PCOS who are advocating self-love. One of them is Harnaam Kaur who is a model, social media star and motivational speaker who is headlining the female facial hair movement, inspiring millions to challenge the regressive beauty norms and celebrate being different. She’s a Punjabi woman with a beard and she’s raking in the compliments. She is also a record holder for being the youngest woman to have a full beard and have been on a bunch of biggest fashion magazines’ self-love issues. How amazing these women are!

Although it may seem easy at times, it takes whole lotta courage and strength to learn to love yourself. And, women often forget that and obsess over the misguided idea of beauty. But these gorgeous ladies are going against the grain, smashing beauty stereotypes into pieces and doing it so well. Women like Torres and Kaur are demonstrating the fact that beautiful doesn’t mean being hairless or smooth or thin. That a woman with a beard might not be beautiful to you, but she doesn’t give a damn. These are just toxic beauty ideals that we need to break and be more acceptable of the real beauty—which is being comfortable being yourself.