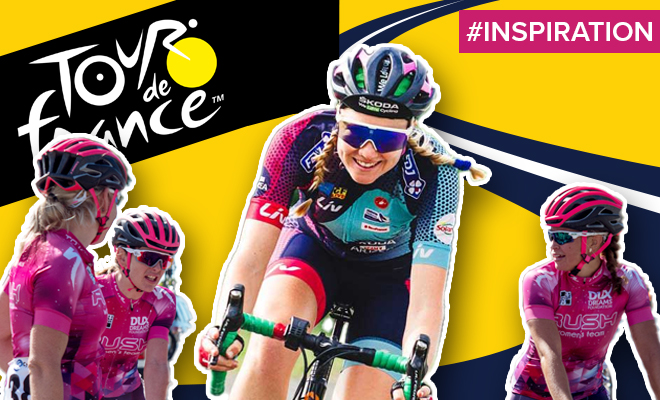 The Women’s Version Of Tour De France Doesn’t Exist Because People Didn’t Think Women Could Do It. These Women Are Changing That

Women have always struggled to make a mark in almost all sports. Despite being equally competent and sometimes superior to the male competitors in several sports, there is a gross discrepancy between male and female athletes regarding pay, prize and popularity. Let’s ignore that for a moment. What’s appalling is that in some sporting events, women are not even allowed to participate because they are deemed unfit to endure the intense schedule and grueling stages of the sport. Case in point, the prestigious Tour de France.

The all-male cycling event that started in 1903 has only had a handful of women editions of the expedition and women cyclists are trying to change that. In a bid to prove that female cyclists are as capable for the challenging 3,484 km race as men, France-based all women’s cycling group Club Omnisports de Courcouronnes Cyclisme Féminin (COCCF) has been holding a women’s race ahead of the men’s event where women riders paddle across the same path since 2014. Their project Donnons des Elles au Vélo (DDEV) which translates to “give her the bike” aims to demand a fair chance for the female cyclists and a place for them in the race.

This powerful move of women dissenting from the event being male dominated has finally got the attention of the Tour’s organisers and the world governing body of cycling, the Union Cycliste Internationale (UCI) who announced that the 2022 Tour will have a women’s version of the race. In case you didn’t notice, that’s how you smash the gender stereotypes and demand equality in a male-dominated world.

13 women @desELLESauVELO who successfully pushed for return of a women's Tour de France rode Stage 15 to Grand Colombier one month ago today, the day after TDF director Christian Prudhomme showed up at their stage start to give them details for the new race to be launched 2022. pic.twitter.com/kUwB4VljhR

This year will mark the 107th edition of the race. The first time women were “allowed” to participate was in 1955 and it was named Tour de France Féminin. 41 women not only participated but completed the race but the version was called off the next year. Since the event has been flagged off, there have been only a few versions of women’s race with shorter distance, shorter schedule and almost no media coverage. While the men’s event enjoys more live spectators than Olympic Games or Fifa World Cup, the women’s version gets only a handful of spectators and sponsors. The last time Tour de France Féminin took place was in 2009 and it will be in 2022 that it will see the light of day again, thanks to the sportswomen fighting back with their zeal and pedals.

The protest race, as I like to call it, was not really a race as women riders were not competing against each other but against the sports authority who didn’t see them good enough for the race. Here, women supported and cheered for the each other and finished off together. They celebrated the completion of race and the fact that they proved a point with champagne and hugs. Were there any winners? No, expect the whole community of women cyclists who will be participating now in the event.

The DDEV project was started by a 34-year-old physical education teacher, Claire Floret who was disappointed with the exclusion of women is the grand race. She told in an interview, “The Tour race gives visibility and is a career-making stint for the cyclists. But there are no women here, that’s probably also why there are few women in cycling.” Women are considered to be lacking endurance and skills for the three-week long racing schedule and thus were excluded from the race which was proven wrong by Floret and her cycling army. The team that started with 3 now has 13 riders who complete the 21-stage race across the same path in record time. These profound and baseless gender stereotypes are prominent in every male-dominated field and sports, especially cycling, is the worst affected of them all. This is why women cycling events face challenges like inadequate funds, less coverage, few spectators and limited racing opportunities.

One of the sponsors of the project and journalist Pete Geyer believes women’s race has as much potential as that of men. Talking about the fact that spectators find the women’s race slow and boring which makes it uninteresting event for the fans, he said, “Fans have often complained of the dominance of certain men’s teams and riders in recent years. If speed is what makes it exciting, then you are also arguing that a race filled with doping riders going faster is more exciting. That is not sport; it lacks integrity.”

'I want to be pushed to my limits and showcase what women's sport is about' says La Course winner.https://t.co/Jyk37WVAHa pic.twitter.com/lffsTv50kC

Although the spirit of the event has inspired many young girls to partake in the grand Tour race, they couldn’t do so simply because they were not allowed to. For years, women’s race has been oscillating indecisively which made it difficult for women to opt for a career in cycling. However, now that the sports authority is finally unveiling the women’s version of the race in 2022, there’s no reason for women to hold back from paddling away to success. This has not only smashed gender stereotypes and fought gender disparity in cycling events but also proved to be an absolute win for all women in sports.

Also Read: Mithali Raj Said COVID-19 Has Set Women’s Cricket In India Back By Few Years. Women In Sports Should Get Equal Opportunities