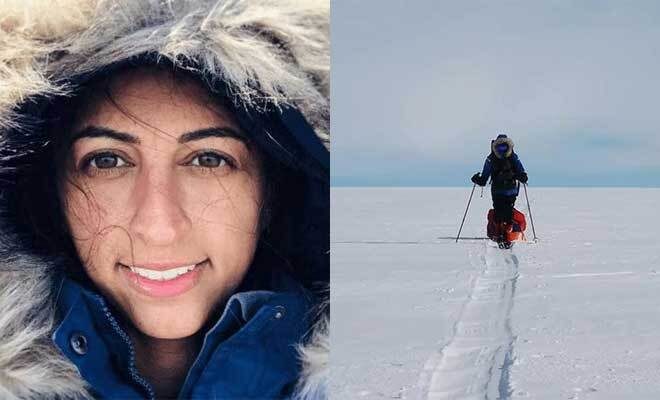 Harpreet Chandi Becomes First Woman Of Colour To Complete Solo Trek To South Pole. She Even Planned A Wedding In This Time!

One of my favourite lines that I have ever read is, “Here’s to strong women. May we know them. May we be them. May we raise them.” The author of those words is unknown but I would like to thank them for this quote. It has always reminded me to befriend women who I can respect and admire and try to be a source of strength for those around me. However, every once in a while I come across incredibly strong women who have inspired me to look straight in the eye of difficulties and moreover, push myself to be a better version of myself. One of those women is Captain Harpreet Chandi aka Polar Preet, who has created history by becoming the first woman of colour to complete a solo and unsupported trek to the South Pole.

32- year-old Captain Harpreet Chandi is a British-Sikh army officer and a physiotherapist who also goes by the alias, Polar Preet. Chandi announced her achievement on her live blog on Monday where she has been documenting her journey through audio blogs and live locations. This announcement was made on Day 40 of her expedition after travelling for  700 miles (1,127 kilometres) or sledge which had all her kit while battling minus 50°C temperatures and winds blowing at around 60mph. “I made it to the South Pole where it’s snowing. Feeling so many emotions right now. I knew nothing about the polar world three years ago and it feels so surreal to finally be here. It was tough getting here and I want to thank everybody for their support,” Chandi documented.

Preet posted to her Instagram about the incredible achievement announcing the same saying, “Preet has just made history becoming the first woman of colour to complete a solo expedition in Antarctica. She completed the 700 miles in only 40 days.” she also wrote her audio blog which announced every one of the great feat which said, “Hello everyone, checking in from day 40. I made it to the South Pole where it’s snowing. Feeling so many emotions right now. I knew nothing about the polar world three years ago and it feels so surreal to finally be here. It was tough getting here and I want to thank everybody for their support. This expedition was always about so much more than me. I want to encourage people to push their boundaries and to believe in themselves, and I want you to be able to do it without being labelled a rebel. I have been told no on many occasions and told to “just do the normal thing”, but we create our own normal. You are capable of anything you want. No matter where you are from or where your start line is, everybody starts somewhere. I don’t want to just break the glass ceiling, I want to smash it into a million pieces. Who’s with me?”

Harpreet Chandi also planned her upcoming wedding with her fiance Army reservist David Jarman who she got engaged to before her expedition. The couple plans to reunite in Chile after her trek. Preet’s special way of asking her bridesmaids to be a part of the wedding was to upload a post captioning it as the proposal to them. The caption talks about how close she is to her friends and how much she loves all the women she wants as her bridesmaids. Absolutely awwwdorable!

I have gone on a solo trek once and while it taught me a lot about myself, it was tough. However, the feeling of accomplishment when you get to the summit is a rush nothing else has given me. Congratulations to Captain Harpreet Chandi aka Polar Preet for making history!