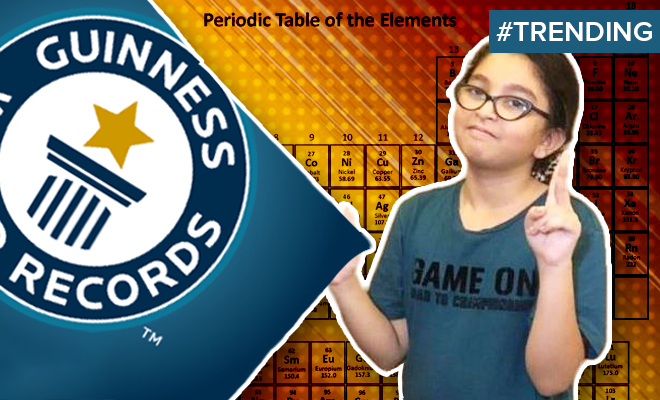 9-Year-Old Girl From Pakistan Sets A New World Record By Becoming The Fastest Person To Arrange Elements On Periodic Table.

I loved science in school but could never memorise the periodic table. I have spent hours cramming the names of the elements, even tried those mnemonics and tricks that are supposed to be fun and help you learn the vast and confusing table of elements pretty easily. But no, it never did it for me. Probably that’s why I gave up science after high school. However, today I came across a nine-year-old who took me back to the horrors of my chemistry classes but left me feeling immensely proud of her. She not only mastered the art of arranging periodic table superfast but actually set a Guinness World Record while at it.

Natalia Najam, a nine-year-old schoolgirl from Lahore, Pakistani broke the world record previously held by an Indian economics professor by arranging all the elements on the periodic table in 2 minutes 42 seconds. “The fastest time to arrange all elements of the periodic table is 2 min 42 secs, and was achieved by Natalia Najam (Pakistan) in Lahore, Pakistan, on 18 July 2020,” reads the statement on the website of Guinness Book of World Records. She is a child prodigy.

She is now the youngest and fastest to do it after beating Professor Meenakshi Agarwal who arranged the table in 2 minutes 49 seconds. “This looks like a dream… I’m very, very happy and excited,” said Natalia after winning the prestigious title. She has now become quite a celebrity in Lahore. “It feels so, so great. Everybody in the family, media and school is talking about me,” she added. The young scientist is truly gifted and hopefully on her way to making a name in the field of science.

Watch her setting the record here.

Pakistani kid Natalia Najam,a Science enthusiast broke Guinness World Record in #Chemistry. She is now the youngest & fastest person to arrange all elements of the periodic table in record time
The previous record holder was a India Chemistry Professor.

According to her mother and mentor, Sheena Afzal, Natalia was curious about science since childhood and never had any interest in games and gadgets like her peers. “She had a scientific mind from the beginning, and her childhood was all about exploring things related to the sciences,” said her mother. What’s surprising is that she never had formal schooling and has been home-schooled by her mother. “Our home sometimes looks like a science laboratory with Natalia doing so much,” she added.

Although she was a brilliant kid since the beginning, her mother could have not guessed she would accomplish such a feat in the mere age of nine until schools shut due to the pandemic. She said, “That was when I started home-schooling my daughter and realised her passion could be utilised for some cause.” And the casue was breaking the world record of fastest arrangement of elements in a periodic table. “We then started zeroing in on one thing, and that was memorising the names of all the elements on the periodic table and trying to organise them as quickly as possible,” she told The Star.

They practised for a couple of months and registered with Guinness but the judges could not make it to Pakistan at the time due to the current global pandemic. Luckily for them, Guinness decided to hold a virtual ceremony for Natalia. “That was a very different day. We were excited and nervous at the same time,” Sheena recalls. The mother and daughter jumped with joy when the timekeepers and judges gave her a thumbs up indicating she has set a new world record. “Oh God, we had done it. We were dancing, hugging and cheering each other on that fateful day,” she said.

Fantabulous kid.!!
I wish you have very bright future.

This the way you should beat us 🇮🇳. The healthy competition between the neighborhood between our both country's.

Thanks to all, who have supported you.

Also Read: An 11-Year-Old Autistic Jiya Rai From Mumbai Sets A World Record For Swimming 14 Kms In 3 Hours And 27 Minutes. We Are So Proud!

Twitterati lauded the young achiever. A twitter user wrote, “Excellent work from Natalia Najam. Beating a record is never easy.” Another wrote, “And she don’t go to conventional school. Homeschooling. She beat the record of an Indian professor by few seconds. Bravo to little girl.” She even got love and blessings from people from India who were surprised to see that a 9YO broke the record of an Indian professor. A user wrote. “Fantabulous kid.!! I wish you have very bright future. This the way you should beat us. The healthy competition between the neighborhood between our both country’s. Thanks to all, who have supported you.” This is the best news of the day I got so far god bless you Natalia. Love from India,” another wrote.

Even at nine, Natalia is aware of the rampant practice of animal cruelty that’s done in the name of scientific experiments and hopes to change that. She wants to become a biochemist when she grows up. She said, “When I see scientists and medics using animals as guinea pigs for testing vaccines, that is cruelty. I’ll try to change this practice.”

It’s so inspiring to see this young girl achieving such an exceptional feat without any formal schooling. It was all her dedication and love for science that helped her set a world record at such a young age. She says her achievement will inspire young children to pursue careers in science and technology, engineering and math and we couldn’t agree more. Here’s hoping she goes on to achieve even bigger things in the field of science in the future and does her country proud.

Also Read: This 5-Year-Old Girl From Chennai Shot 111 Arrows In 13 Minutes While Being Suspended Upside Down. She Is A Child Prodigy