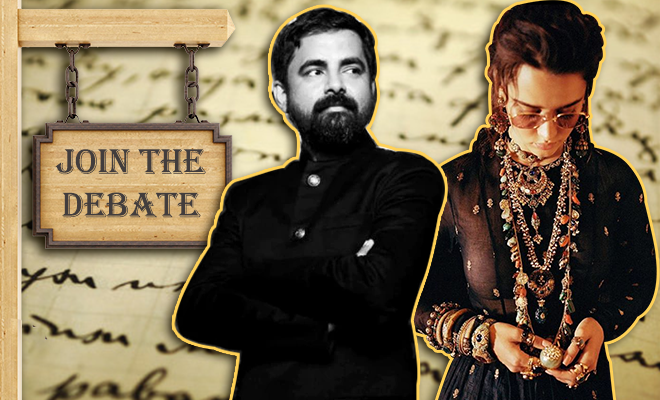 Sabyasachi’s Post Got Called Out By Netizens For Being Misogynistic And He Deserves The Flak!

There are bands that get their marketing right. That endear themselves to their audiences and make a place in their heart. People remember the jingles. And then, their products further strengthen their positioning. But this isn’t what happened with ace designer and bridal favourite Sabyasachi Mukherjee. He’s one of the premier designers to come out of India and making waves all over the world, his brand is almost synonymous with brides. The weekend though, proved to be all sorts of bad for him.

The designer has released yet another collection on Instagram, this time chunky and OTT jewellery, and the marketing campaign around it is a massive fail. Why? The sentiments mentioned by the designer have been labelled ‘misogynistic’ and ‘regressive’. Sabyasachi is turning into a designer people love to hate, the current social media fiasco is going to difficult thing to just brush under the carpet. Just last week, we were defending his choice of models with this article.

ALSO READ: Sabyasachi Gets Hate For Featuring Models With Cleavage. How Are Breasts Against Indian Culture?

It all started when the fashion house released their new line of heritage jewellery, titled ‘Paradise Lost’.

According to the brand page, the collection is inspired by a story by Rabindranath Tagore called ‘Monihara’. The story is a classic from Tagore, a tale of lost jewels and an unhappy heroine. The story talks about how obsessed the heroine becomes with her blingy possessions, using them to escape her reality. Meanwhile, the inspiration also comes from an “an amalgamation of many cultures across the Silk Route”, which makes more sense given the aesthetic of the collection.

The collection is exquisite on its own, but the offence lies in the badly written, bougie and unnecessarily poetic post that is oh so wrong. It is okay to base a collection on a character from a sad story, but to lump all women and generalise them based on how they choose to dress up is where the line should be drawn. No, not all women who love to dress up are wounded. Especially when you are an influential designer and your audience consists of fierce and independent women. Did the red flags not start waving in front of anyone who read this copy before posting it? We think not!

The incessant comments prompted an apology from Sabya himself. The detailed statement from the designer can be summed up to mean that while his intentions were right, they came forth in the wrong way.The designer chose to derail from the conversation at hand, hiding behind the veil of a mental trauma. The apology seemed insincere and the internet continue to give the designer hate, that he rightfully deserved. The designer’s social media team hoped to start a conversation about his collection but it was written in such flawed language, the sentiment was completely lost. The apology was met with criticism as well.

How difficult is it to unlearn misogyny? All I can see is a man, who I considered a fashion legend is failing to understand his audience. This is not only chauvinism but your marketing strategy is flawed in it's genisis of understanding women. #Sabyasachi @sabya_mukherjee pic.twitter.com/iGjpcl0q6A

The controversy surrounding Sabya had many designers and stylists chip in as well. Akshay Tyagi, who is the name behind many stylish men in Bollywood called it a publicity tactic. “Let’s just leave it as the beautifully realised imagery. We don’t have to make it meaningful to engage with a certain section of people. It’s a stunning campaign in terms of technicality, however, I don’t think it’s the right approach to have this kind of comment. At the end of the day, people will buy bridal jewellery. He’s an earnest person and seems loyal to his cause. Having said that, he should have left the post with just the Miss Havisham quote. Sadly, the interpretation of the inspiration has lost its value. The intent may have been pure, but the message doesn’t tie up with the original quote and the imagery,”.

Generalising women and emotions is unacceptable! Maybe some women like makeup, maybe some don’t. Why can’t we promote self-love, self-care and self-worth for women, rather than shaming them. Resentful advertising by #Sabyasachi #womenempowerment #womenrights #women pic.twitter.com/zym6LMD2KM

For designer Nachiket Barve, it is all about the designer’s vision. He said, “Everyone’s way of coping with their pain is different -it could be dressing up or withdrawing into a shell. One couldn’t box and judge them for dressing up or dressing down but each designer has his own way of deriving inspiration and storytelling so to each his own,”.

So how does one separate the work from the man? This is not the first time that Sabya has been criticised for his comments on women. In an interview last year, he said, “In fashion, you have to reinvent yourself every three to five years. You need to be fresh. Right now, I’ve become tired of gaunt faces and stick-thin models. I’m obsessed with boobs!”. The comment is crass and while intended to be cheeky, comes off as objectification. There was also the Harvard controversy, where he literally shamed women for not being able to wear a saree.

So how do we decide on what to believe about Sabya? To completely disown him by calling him misogynistic wouldn’t be fair either. Yes, the man’s words are flawed but his sentiment might not be. Whatever is the case, the brand does need a revamp on its marketing team. What started as artful and beautiful campaigns, have now turned into fodder for controversy and elitism.

ALSO READ: Sabyasachi Mukherjee Is The Keeper Of All Bollywood Bridal Secrets And We Know Exactly Why

What are your views about it? Let us know.