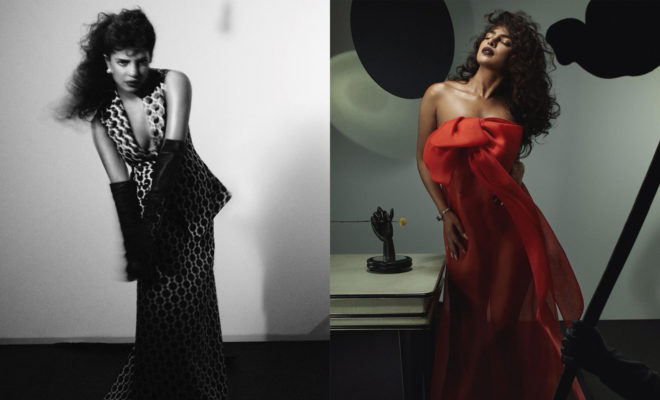 Priyanka Chopra time and again has shattered boundaries and rose to the stature of being a global star. Taking the centre stage, as the face of international magazine, Vanity Fair, Priyanka Chopra takes the readers through her journey from Bollywood to Hollywood and reveals a glimpse from the future she envisions. Speaking to writer Rebecca Ford for the magazine’s February issue, she revealed about striking a balance between busy work schedules and family life, indicating her plans to welcome a baby, sometime in future with husband/musician Nick Jonas. The actress further unravelled about the tough days on the sets of Matrix: Resurrections, finding a supportive figure in Keanu Reeves, and revisits her journey in the entertainment world, ever since she was crowned Miss World 2000. Sharing reactions on the same, actress Sonam Kapoor, called it a ‘proud moment,’ while actor Arjun Kapoor and YouTuber Lilly Singh came together to cheer for our desi girl.

The magazine describes the cover star as an ‘outsider who broke down barriers,’ and rightly so. Styled by Leith Clark, Priyanka Chopra sizzles in a strapless fringe dress, with voluminous curls and deep brown lip shade to top it all off. Certainly, it is a look that reminds me of her salmon strapless top and fringed skirt by designer Sally LaPointe, at the People’s Choice Awards, in 2017. While the cover doesn’t surprise me, the pages inside had a great line-up to offer.

The second look featured our desi girl in a Valentino pantsuit. Donning the ensemble, that came dipped in the shades, green and mauve, the cover star styled her hair in a mohawk-esque fashion, bold bronzed make-up with the deep brown lippie being a constant, she said no to accessories. This ensemble instantly strikes a resemblance with Zendaya, who wore the suit during the press tour of her latest release Spider-Man: No Way Home. The partly-lit backdrop with a scaled-up version of Himalayan Blue Poppy, featuring as Priyanka’s co-star in the frame, was designed by set designer Sean Thomson.

Looking ethereal in the red Dior dress, the third look in line, features the delicate semi-sheer silhouette with a ruffled bow, headlining the strapless bodice. She opts for minimal jewellery from Bulgari High, that incorporates a hand bracelet, while her freshly blow-dried curls add drama to the entire look. Make-up wise, Priyanka Chopra opted for a glossy look, sealed with a bold shade of deep brown for the lips. And I love the flower silhouette and shadow-play in the entire frame.

Posing in a similar set-up, the actress relied on power dressing for her fourth look. A signature Louis Vuitton double-breasted pant-suit in the shade white and black, the ensemble features an asymmetrical blazer with black inner lining and stripped hemline, and black trousers. While the ensemble makes a pretty much powerful statement, I just wish there was more to the makeup and hair, maybe a more glossy, clean look, instead of the messy curls that remain constant throughout.

One of my favourite looks from the entire series, is this Erdem crisp, A-line silhouette, with a peplum detail around the waist and honeycomb print running throughout the two-piece dress. What adds to the vintage charm are the black leather gloves and white pearl studs from Bulgari High. Definitely an ensemble that PC has not tried her hands-on, though her hair-do, is somewhat similar to her retro hair look in the film Teri Meri Kahaani. 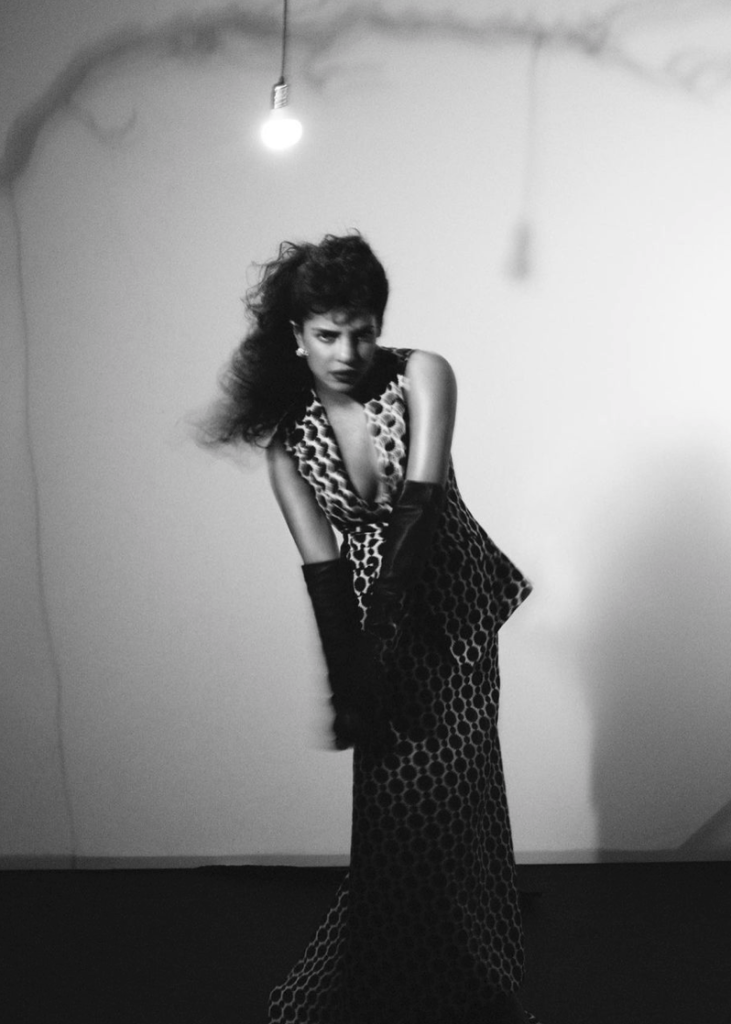 On the work front, Priyanka Chopra will next be seen in Citadel with Richard Madden, rom-com Text from You with Sam Heughan, and Jee Le Zaraa alongside Alia Bhatt and Katrina Kaif.

Priyanka Chopra Says There’s Nothing Like ‘Citadel’ On Television, Reveals Shooting For It Was ‘Physically Intense’. We’re So Excited!