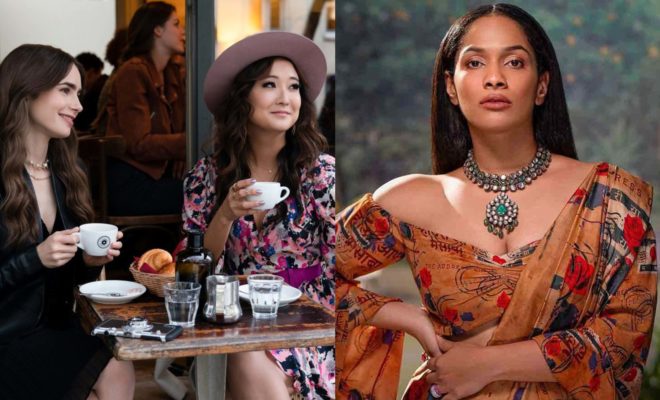 A Masaba Gupta Design Made A Cameo Appearance In ‘Emily In Paris’ Season 2! Have A Look

Ever since its release, season two of Netflix’s popular show Emily In Paris has been making headlines. But for the most part, it’s not the show’s narrative that has taken over the internet but the costumes worn by Emily and her best buds. Revolving around the life of Chicago based marketing executive, Emily Cooper essayed by Lily Collins and her many adventures in the city of  love, the season 2 further talks about her struggles with work, love and the French language in general. Displaying a fabulous yet overdone line of costumes, designers Marylin Fitoussi, and costume consultant, Patricia Field, have put their best ideas forward. Just as big as the drama, her costumes are oozing colours and prints in their full glory. Be it the infamous Prada crystal baguette, or the Rotate Birger Christensen bow bodycon dress from her birthday episode, every piece speaks to the viewers and calls for attention.

But what is interesting in this mixed roster of designers from Gucci to Saint Laurent is the inclusivity of an Indian brand too. Yes, you read that right! While Emily walks her talk wearing some gorgeous outfits, her friend Mindy Chen essayed by actress Ashley Park too, wore some exquisite silhouettes that caught our eye. Taking India’s popular designer Masaba Gupta’s creation to the global stage, Mindy Chen was spotted in a bold red House Of Masaba jacket. Layering the piece over her printed nightwear, the jacket has been dugout  by the costume designer duo from the shelves of Masaba Gupta’s popular designs. The tribal mask red jacket appears in episode 5 featuring the bold black patent House Of Masaba motifs on a red layer. 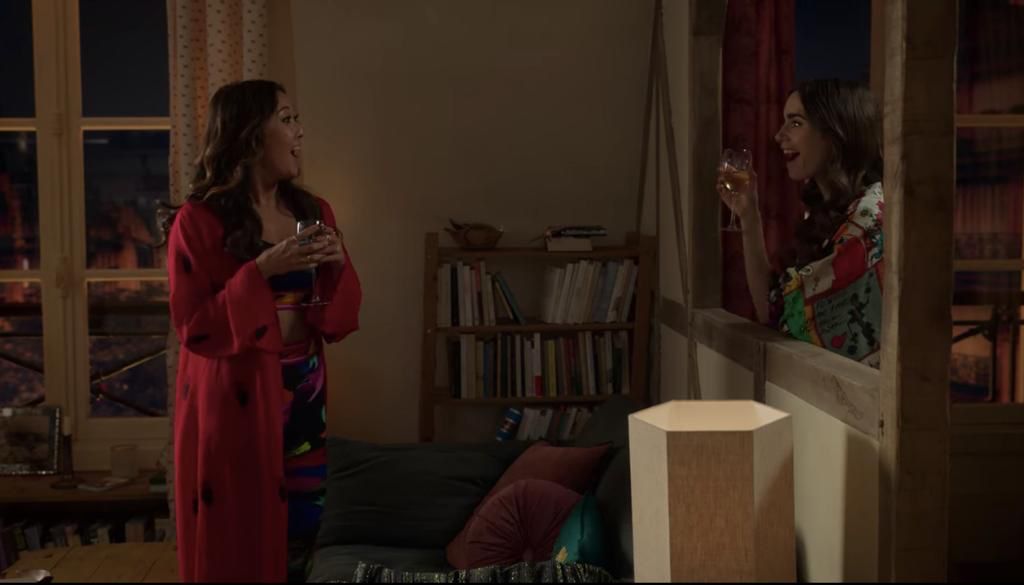 ALSO READ: Emily’s Wardrobe In The Season 2 Of ‘Emily In Paris’ Proves “Too much good taste is boring”

While it is not the first time Masaba Gupta’s designs were exhibited on a global stage, the designer previously collaborated with the infamous show Game Of Thrones for an exclusive line of merchandise.

Presenting an exquisite line-up of designer pieces, what outshines in Emily Cooper’s closet this season are some quirky accessories. From donning colourful, fingerless hand gloves, her usual bucket hats, glitter micro bags to printed headscarves, her wardrobe brings out a blend between vintage and contemporary fashion. Confirming that Emily’s not a French girl and neither are her sartorial picks, the mix of prints, patterns and silhouettes, was a little too outlandish this year for viewers to watch. And not just Emily but her gal pal Camille and Mindy take the centre stage in terms of story-telling and at times better fashion too. While Emily’s clothes in certain frames were a little ‘amusante’ but we loved her overall sprightful style.

You can catch all the new episodes of Emily In Paris season 2 exclusively on Netflix.

Masaba Gupta Shared A Simple Yet Beautiful Makeup Look On Instagram. Drop That Skincare Routine Next!